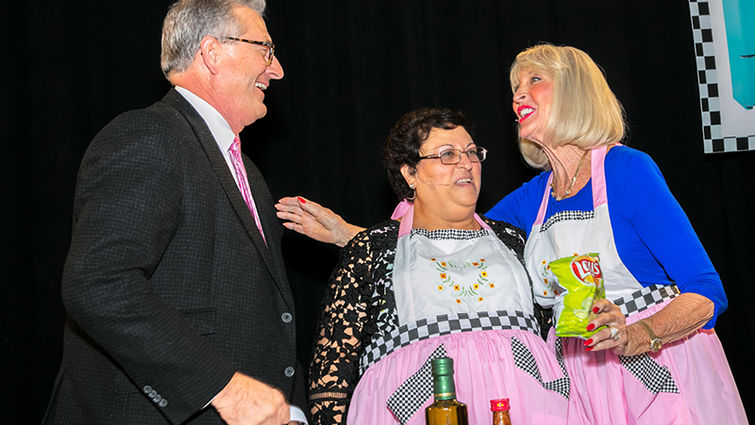 The flamboyant Green, who has served as mistress of ceremonies since the very first Dishes for Wishes in 1999, elicited silence when she told the estimated 350 guests that she intends to retire from the event following her 75th birthday next year.

Moments later, however, Green reversed her decision when Kerry Heinrich, JD, CEO of Loma Linda University Medical Center, told her the new Children’s Hospital tower is expected to open in 2020. On hearing Green’s promise to stay on until 2020, the crowd responded with spontaneous applause.

Green was her colorful, ebullient self throughout the evening, joking with law enforcement officers who waited tables during the dinner and carrying on an extended repartee with guest speaker Courtney B. Martin, DO, director of the Total Care Birth Center at Children’s Hospital.

Green got a huge laugh from the audience when she called guild co-founders Dixie Watkins and Eloise Habekost to the stage and gave them each a commemorative apron. She said the pair recently went to the home of the seamstress who makes the aprons, only to discover that she was not at home. What’s worse, the gate had locked behind them and since it can only be opened from inside the house, Watkins was forced to climb the fence, open the gate and let Habekost out.

The heart of the event is a cooking class in which chefs from notable Inland Empire restaurants demonstrate one or more of their signature dishes onstage while local police and sheriff’s department officers serve the dishes to the guests. Diners, in turn, festoon their waiters with dollar bills of various denominations, all of which go to benefit the hospital.

Guild treasurer Penny Moores said that altogether, the event raised more than $63,000 this year. The monies came from the sale of admission tickets, corporate and individual sponsorships, proceeds from the opportunity drawing and a percentage of sales from the gift boutique vendors. Moores praised one donor, who wishes to remain anonymous, for a generous gift of $15,000 and said monies raised this year will go toward the purchase of two new neonatal heart monitors and other selected equipment for the Total Care Birth Center.

Afterward, guild President Lynn Sleeth said she was pleased with how the event turned out. “The whole thing was amazing,” Sleeth said, praising the law enforcement officers, Teen Challenge representatives, the nursing administration staff who manned the kitchen, and all the other volunteers who worked behind the scenes to make it a success.

Sleeth said the combination of Green’s quick wit and the creative genius of Dishes for Wishes coordinator Angie Temple marks the annual fundraiser as the “crème de la crème” of guild activities.

“No one works harder from start to finish than Angie,” Sleeth said, pointing out that Temple has coordinated the event for the past seven years, developing themes, coordinating décor ideas, and working with members of the board and local chefs. “She is so generous of her time, talents and finances. She does this all with a loving heart and beautiful smile, too,” Sleeth said.

She also expressed relief that Green had changed her mind. “Martha has been doing this for the better part of two decades,” Sleeth said. “I can’t imagine this event without her.”