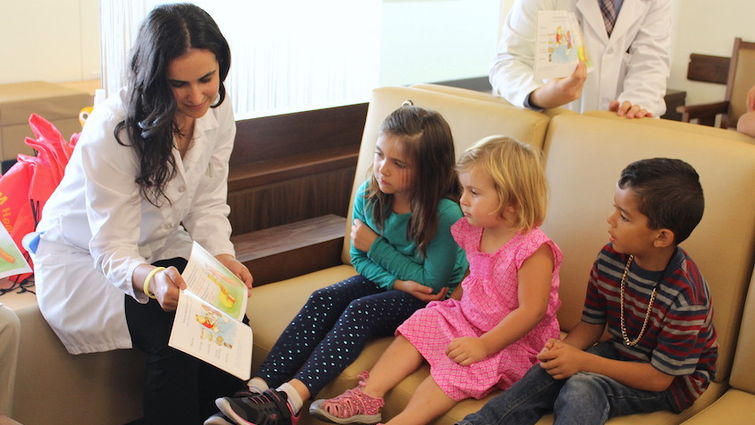 A team of Loma Linda physicians is encouraging kids to join “Team Henry.” Who’s Henry, you ask? He’s an overweight hamster who realized he needed to make some changes in his life.

As part of a service grant project to address pediatric obesity in the community, four Loma Linda physicians headed over to H. Frank Dominguez Elementary School in early October to inspire children to live a more active lifestyle.

The kids actively participated in story time, reading along about Henry the hamster and how he learned how to eat better.

“What are we going to do to get healthy?” Simon asked the third graders. To which many replied, “Eat vegetables!!”

“Let's all get moving and eat healthy!” the doctors read from the book.

One student asked how long they should exercise, and the docs informed them that at least 60 minutes a day was best for them and at least 30 minutes per day for their parents and all adults.

Smits said that pediatric obesity is something he sees every day and needs to be addressed. “This book is a way to learn about and adapt changes that will keep these children and their families from comorbidities,” he said.

After the read along, each child was given a copy of the book to take home as well as a Team Henry backpack filled with items that encourage healthy living. The book was read in English, but it also had text in Spanish.

The doctors, along with Brandon Henry, MD, who recently graduated from the Loma Linda University pediatric residency program, worked together to acquire the items in the backpack, which included: a wearable Henry pin/button, a "Move like Henry" silicon wristband, a small kick ball, Team Henry collapsible water bottle, sidewalk chalk, WIC cookbook for children and parents, healthy snacks, and a packet of family games to get kids moving. Information on the SACHS clinic was also included in the backpack as a resource for parents who may benefit from it.

After leaving the elementary school, the docs headed a few blocks west to the new SACHS clinic at the Loma Linda University Health – San Bernardino Campus. There they read to children and their families in the lobby of the pediatric clinic. The youngsters were also given backpacks to take home.

Simon stated that she and her team were “very excited to be engaged in the school system and the broader SACHS community. We really hope we can impact the families,” she said, “not just the children.”

The obesity reduction event was made possible by the American Medical Society for Sports Medicine (AMSSM) Foundation Humanitarian Service Grant. The team of Loma Linda University Health physicians was one of five recipients from across the country to receive a $2000 grant from the AMSSM to perform a humanitarian service project.

“This project is a great example of how the American Medical Society for Sports Medicine Foundation supports the humanitarian work of our members; doing what we can at the grass roots level in reaching out to educate and promote health and safety for our patients in our communities,” said AMSSM Foundation president, Margot Putukian, MD.

“Providing young children with great educational information about the role of exercise and nutrition in decreasing obesity and improving their health is inspirational,” Putukian added, “and the AMSSM Foundation is incredibly fortunate that our members are able to ‘pay it forward’ in their communities. Congratulations to Dr. Simon and her colleagues, as well as Dr. Rouzier with his wonderful book, in representing AMSSM and making a difference in the lives of our patients and communities.”

“It is humbling for our team to have received this grant,” said Simon. “It’s great to be able to partner with the school to be able to teach these children how to be healthy in a fun, interactive way. ”

Simon stated that the residents working with her on this project are all interested in going into sports medicine.

Overall, 200 backpacks were put together. Over 70 backpacks were given to the children and staff at the elementary school; many more were handed to children at the SACHS clinic. The remaining backpacks will be handed out to those who come through the pediatric and family medicine clinics at Loma Linda University Health – San Bernardino Campus.