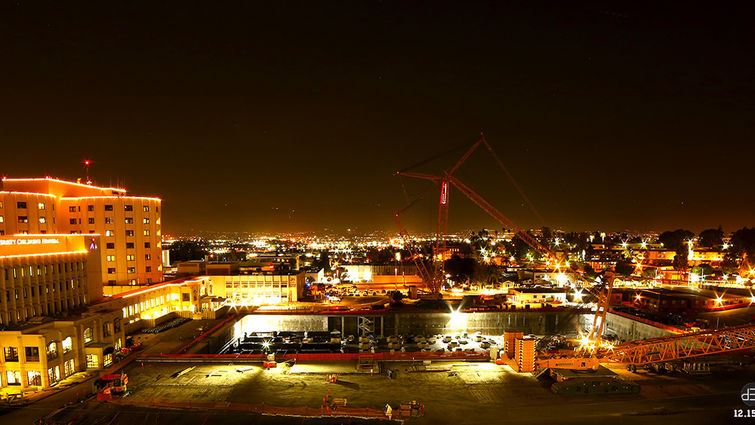 Before a building as large as the new Loma Linda University Medical Center’s adult hospital and Children’s Hospital tower can go up, the builders have to dig down. The foundation for this structure included an innovative seismic safety system, one that is designed to keep the hospital safe and in operation through large earthquakes.

Now that the building effort has completely filled the foundation “pit,” we want to show you what will support the structure for decades.

We’ll be sharing photographic updates of the hospital construction work on a periodic basis. Watch for special emphasis on some of the behind-the-scenes-views and untold stories. The new hospital is a key part of Vision 2020 – The Campaign for a Whole Tomorrow.

Dennis Park has photographed and chronicled the tremendous changes that have occurred on campus over the past five decades, and he is continuing to document this important part of the campus renewal effort. You can also follow his work at his blog, www.docuvision2020.com.

The Pit contains the foundation — the concrete that is designed by the architects and structural engineers to hold the building. The shoring walls, the foundation walls along with the connecting rebar, are anchored by long, horizontal soil nails and vertical steel pilings that are sunk some 90 feet in the ground to retain the soil from collapsing on to the foundation and the building structure.

To accomplish the goal of reaching sub grade and constructing the foundation took the following:

Innovations in seismic safety used in the pit are: 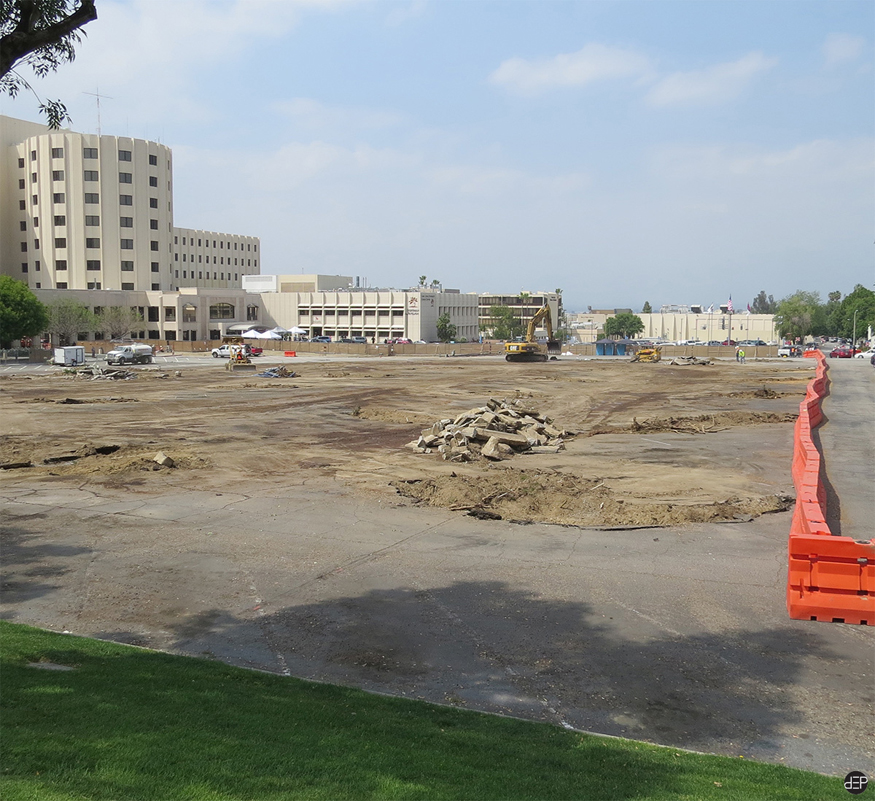 February 2015: Heavy machines were used to level the ground. 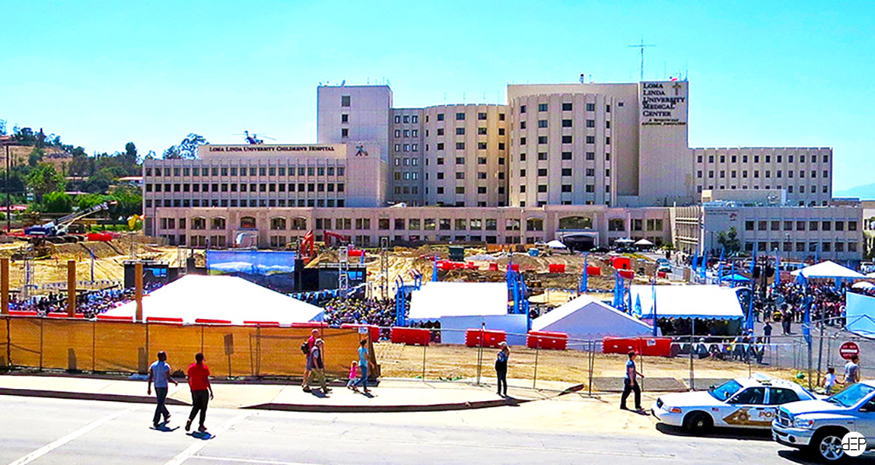 May 22, 2016: Groundbreaking was held on a newly paved asphalt lot, which would later serve as the “yard” for equipment, steel and other construction necessities.The date of the Ground Breaking will serve as the date the pit was inaugurated. 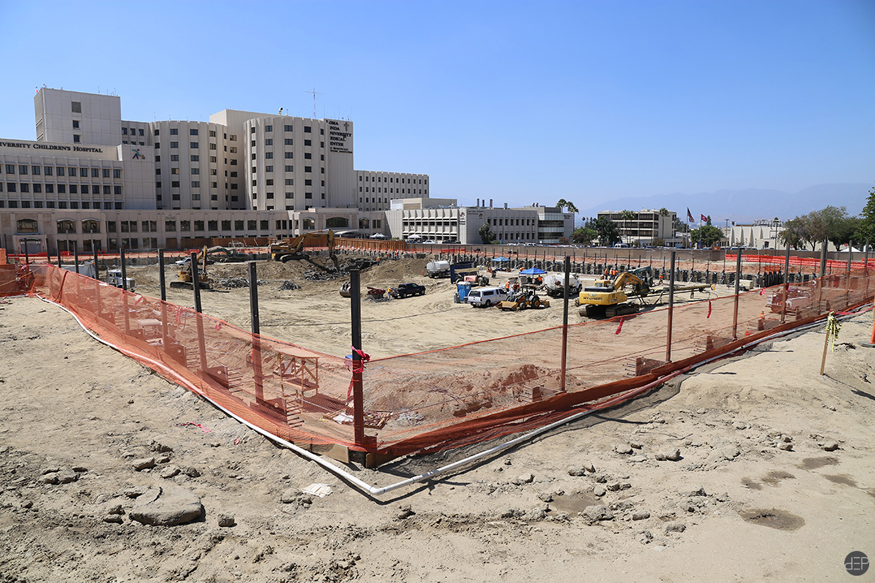 July 2016: the perimeter of the Pit was more completely defined as illustrated in this photo taken from the southeast corner. 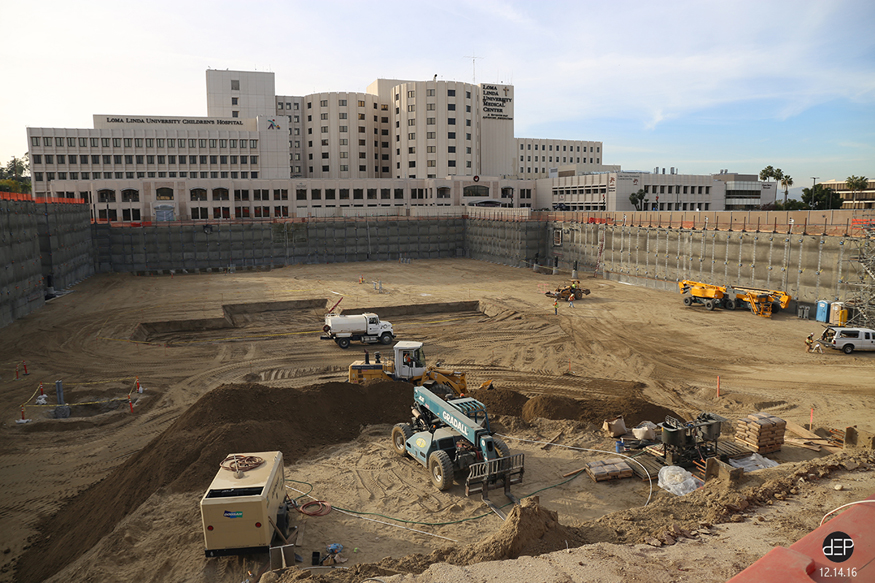 December 2016: After approximately six months of excavating, the crew reached grade. Three elevator pits were being excavated and compacted.

Major Foundation Elements at the Bottom of the Pit 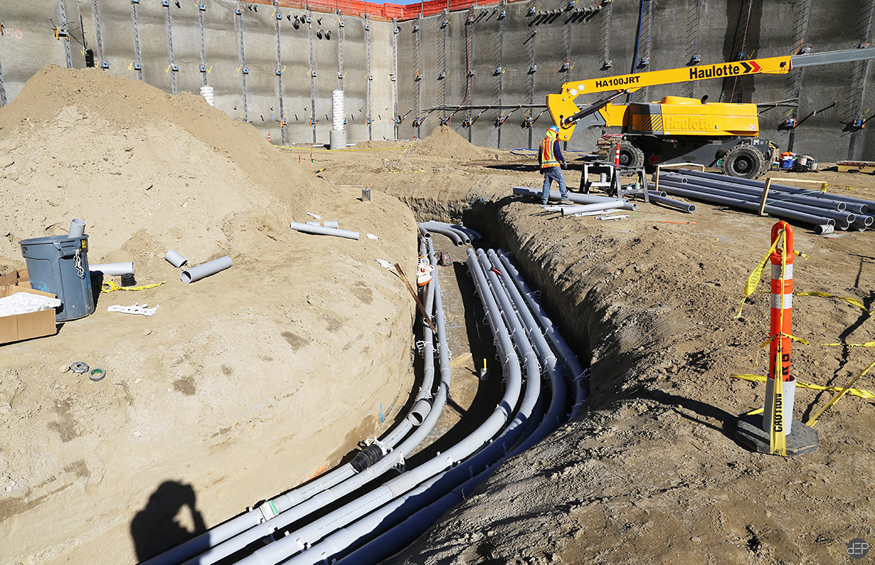 Electrical and telecommunication ducting were laid in trenches, covered in concrete, and then soil -compacted to grade. 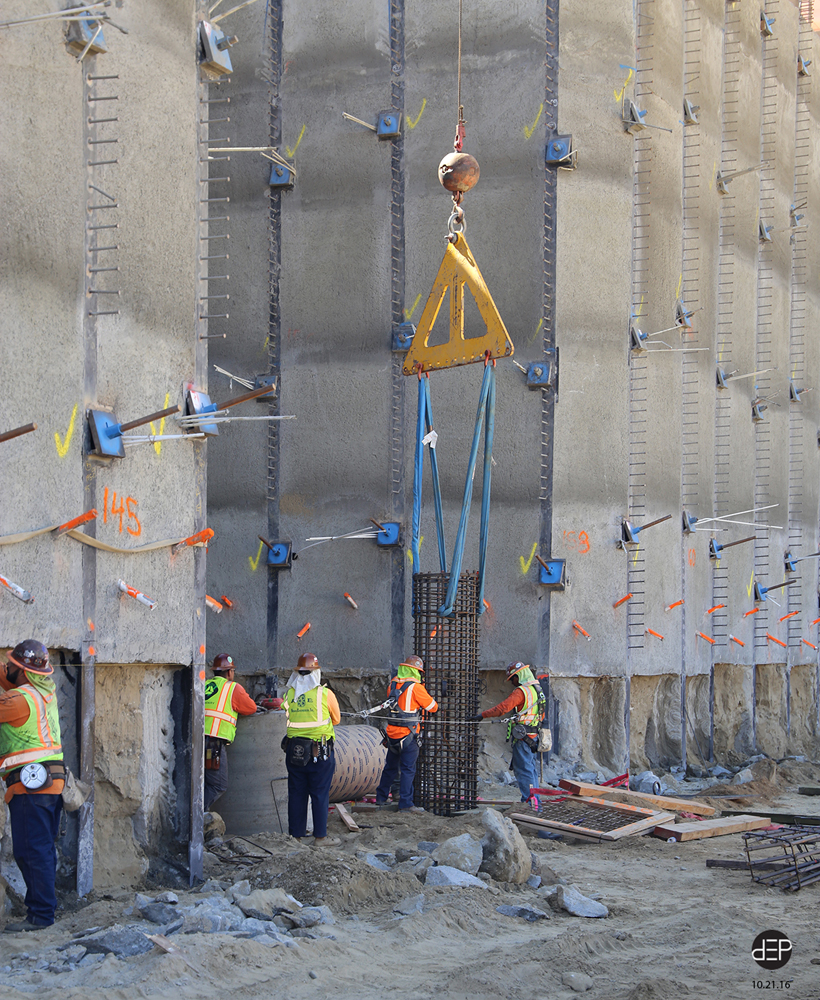 Eight rebar caissons were lowered into holes that were drilled 45-feet below grade. The caissons will serve as supports for the wider cap slabs that will be poured on top of the foundation walls. 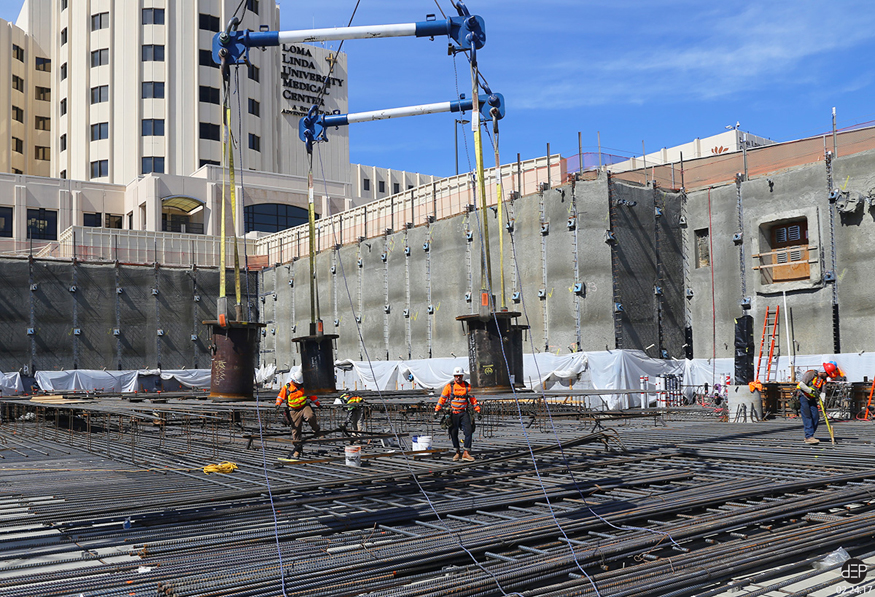 Beginning at the west end of the pit, the rod busters began to layout and tie the rebar into place. In addition to laying the rebar, they would lower four sleeves at the four corners of the base isolators. These sleeves tie into the seismic protection system. 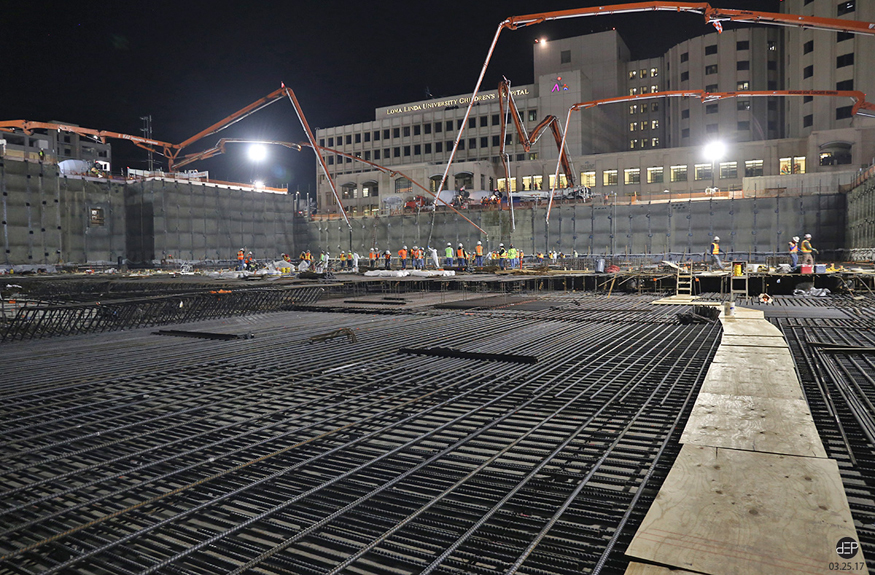 The foundation concrete was poured in sections over three dates: March 25, 2017; April 29, 2017; and May 20, 2017. These pours were an important phase of the project. One of the workers remarked, “Well, when this foundation pour is over, we won’t have to play in the dirt anymore.” 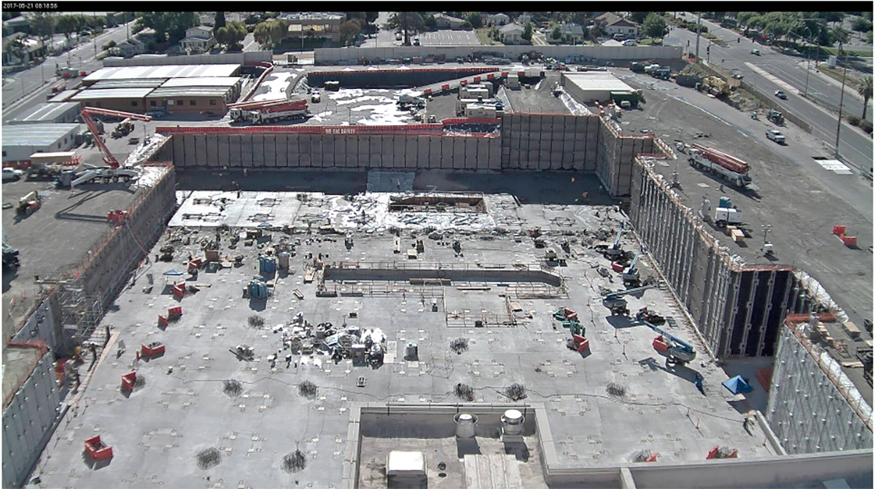 May 21, 2017: After an all-night concrete pour, the long-awaited four-foot thick concrete floor was joined spanning the width and length of the pit. It is from this foundation floor that the steel skeleton will rise above grade to the full measure as designed by the architects.

Embedded in the Foundation are two very important (must have) components of the seismic protection system: The Base Isolators and the Damper Pedestals. 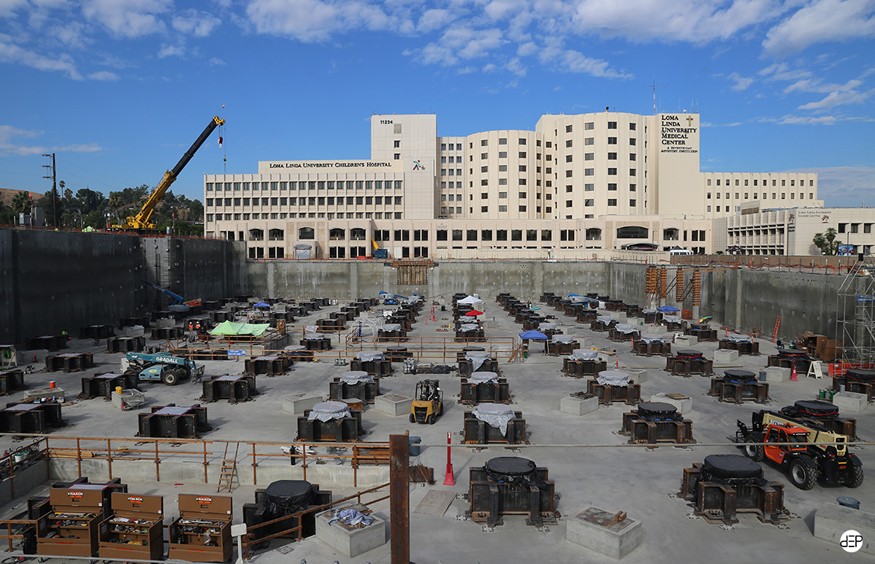 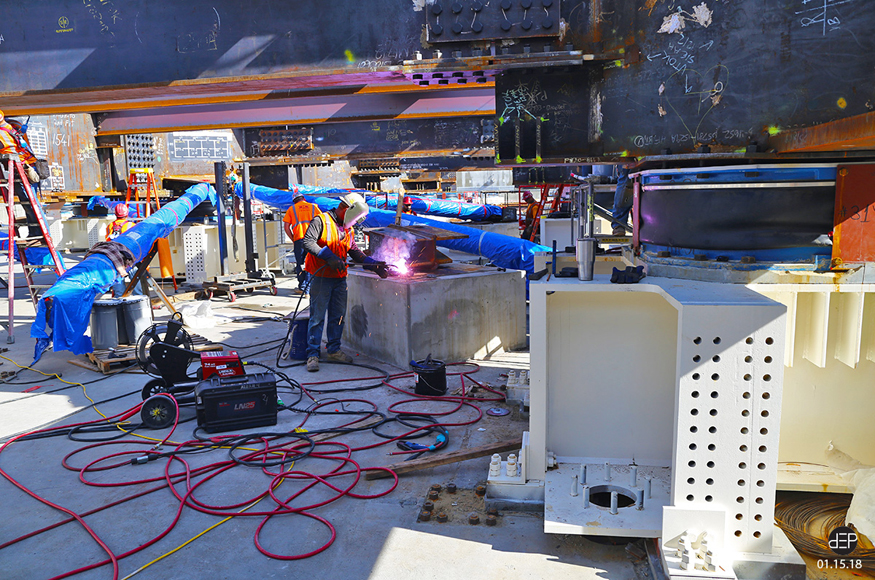 One of the damper pedestals (center), on which a welder is securing a damper bracket to the pedestal. Each pedestal has two dampers: one end attaches to a spline beam node and the other end is anchored to a pedestal bracket. Each damper is 30-feet long and weighs 6,000 pounds. At the lower right is a base isolator, on which the node of the spline beam is bolted. 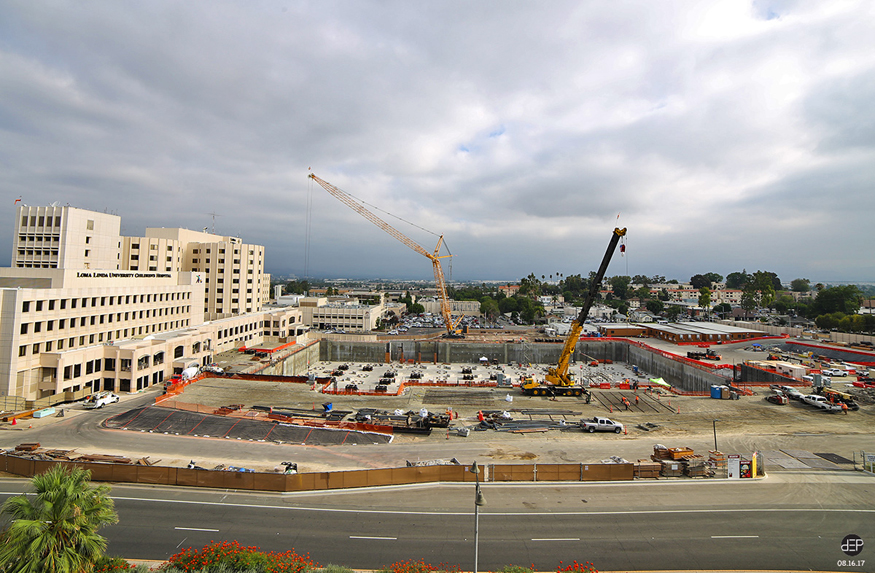 The four corners of the pit before the steel. 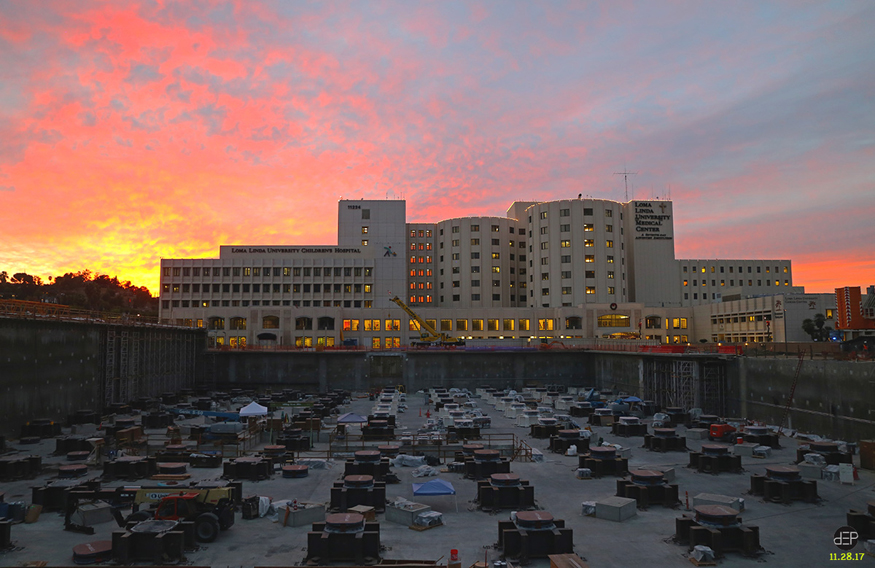 With a beautiful sunset over the Children’s Hospital and Medical Center, the pit awaits the phase of progress: the Steel. 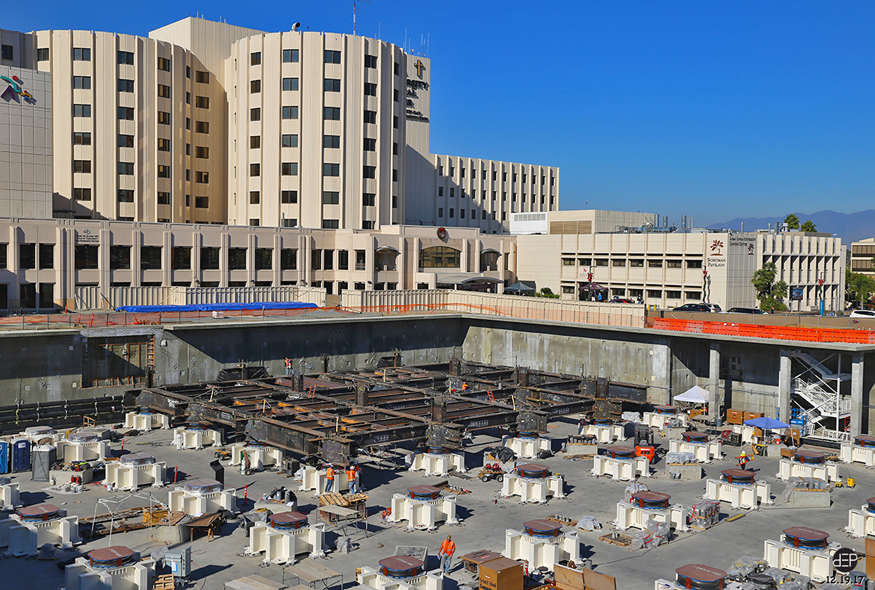 December 2017: Gigantic steel spline beams began to raise the level of the pit toward grade and above. 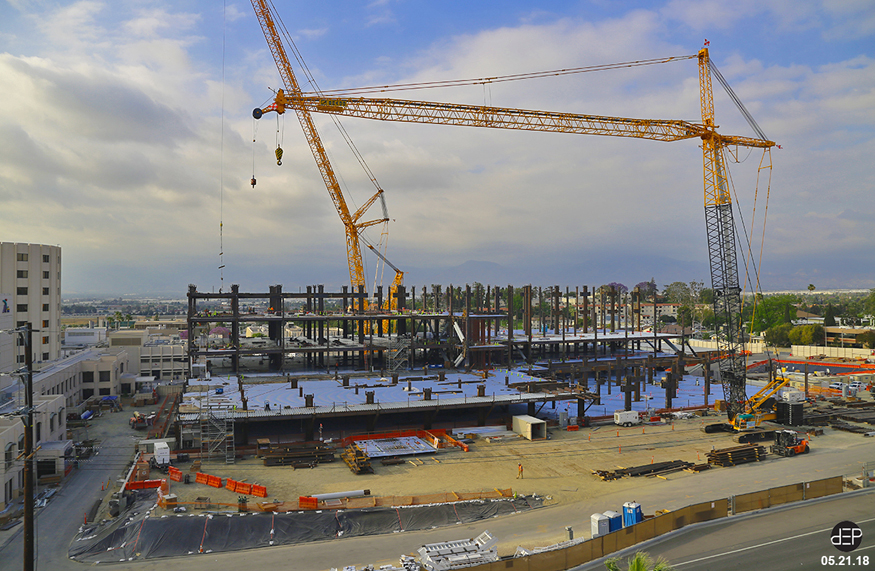 May 2018: The Pit has been filled by steel, the iron worker’s wrench, and the welder’s torch. What was the Pit is now a memory: All floors, with decking, have reached the original grade or beyond. Although the Pit is out of sight, it is doing its job containing all of the seismic reduction elements (dampers and isolators) along with 20-percent of the weight of the building in structural steel on the first layer only. Much more to come.