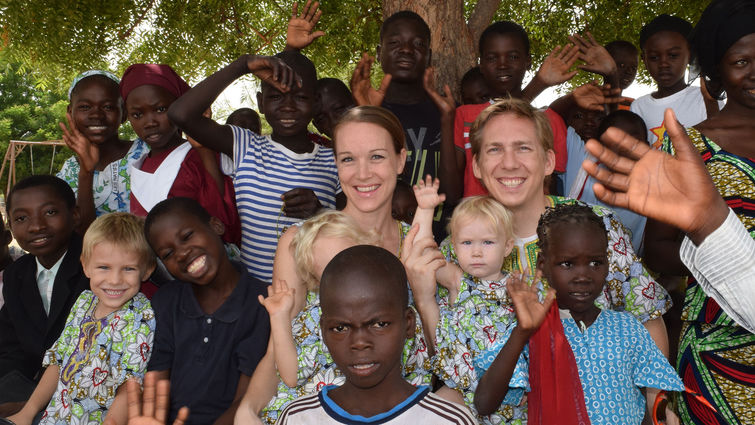 The family had brought the pregnant young woman into the hospital for malaria. Worse, her blood sugar had been dropping so badly that she went into a coma. But the family then changed their minds and wanted to take her back home for treatment by the witch doctor. After all, they believed she first became sick because she was under a curse for some infraction, which would require the intercession of the witch doctor anyway. Danae Netteburg, MD, however, knew that if they took her away, she would die. So, right there, in the hospital hall, she got into a shouting match with the family.

The yelling continued until the family, finally, relented. Because the hospital didn’t have a sugar intravenous, medical staff had to use frosting from a birthday cake. When they put the frosting in her mouth, she started getting better. The young woman went on to recover, and, a few days later, Netteburg delivered the baby.

The story is somewhat typical of what life is like for Drs. Olen and Danae Netteburg, Loma Linda University School of Medicine graduates (Olen 2007, Danae 2006) working, since 2010, as missionaries in the African country of Chad at Bere Adventist Hospital. The 100-bed facility is nearly 25 miles away from the nearest paved road.

Another pregnant woman was once brought to the hospital by her family — however reluctantly. She was from the Fulani tribe. The nomadic Fulani were distrustful of Westerners, whose ways and lifestyle seemed so different from theirs. After all, a thousand years ago the Fulani didn’t live much different than their descendants do today.

However, even her family members could see that the young woman was dying. The baby she was to deliver had been stuck in place for 10 hours. By the time they arrived, it was touch and go. The Drs. Netteburg delivered the baby. The issue now was to save the mother, whose uterus had ripped in half by the time she arrived at the hospital. Danae Netteburg performed a hysterectomy and the mother stabilized.

But the family still didn’t trust the hospital, and the Netteburgs feared that they would, at the first chance, take the woman away before she was, medically speaking, ready to leave. That happens a lot at the hospital, Olen says. Patients just leave before they should.  Fortunately, the family let her stay long enough for a full recovery.

For the Netteburgs, saving lives and helping people survive tragedies are all in a day’s work.

Of course, the question is, Why do they do it? Why would two physicians, now with four children, give up the material comforts of living in the United States to work in austere conditions for a fraction of what they could be earning elsewhere?

“It’s just the chance to serve,” says Danae. “There’s a satisfaction from this that money can’t buy.”

And, adds Olen, “We have food, clothing, a roof over our heads. We are not lacking what we need.”

Growing up, Olen hadn’t really thought about being a doctor. He graduated from Andrews University in Berrien Springs, Michigan, in 2001 with a BS degree in mathematics education and biophysics and a BA in German studies with religion and chemistry minors. However, after graduating college, he spent some time at Heri Adventist Hospital in Tanzania where he watched missionary doctors working. At the time, he still had no idea what he wanted to do in life.

After leaving Heri, he took a train ride and a thought occurred to him. “It suddenly hit me on the train,” he said, “that if I if I don’t do this, that is, medical missionary work, I will miss it. At that point, I decided not only did I want to become a doctor, I wanted to be a missionary one as well.”

His future wife, Danae Bland, who graduated from Southern Adventist University in Collegedale, Tennessee, in 2002 with a BS degree in biology, spent a year at a missionary outpost in Zambia. She had the burden to work as a missionary doctor as well.

When the door opened for Chad, the Netteburgs took it, and haven’t looked back since.

Because of the challenges, however, hardly a week goes by, both admit, without one of them thinking, That’s it, that’s enough — we need to go home, now!

“It can get discouraging,” says Olen, “when some of the locals, for instance — usually the politicians — accuse us of all sorts of things that are just untrue.”

Some have accused them of not being real doctors, not having finished medical school, or only working there to practice on the locals. Some even accuse the duo of working there only for the money. “Talk about ironic,” Olen says.

But they haven’t left because, at least for now, Chad is where they believe the Lord would have them be. They love the work, they love the people, and they love the kind of medicine they get to practice, knowing that they are making a difference in people’s lives in a way that, perhaps, they couldn’t at home in the United States.

And for those studying medicine or who are doctors already, and who are thinking about medical missionary work, Olen says, “Get in touch with missionary doctors as soon as you can. Learn from them about the system. It’s easy to get sidetracked and lost amid the red tape. But, you are really needed out there, believe me.