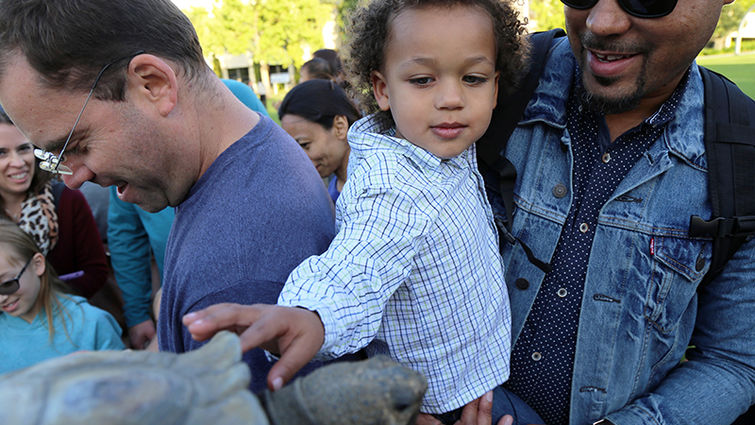 Jack the Bison wasn’t allowed inside, but a wide variety of his furry, feathery or slithery friends got to come into the sanctuary of Loma Linda University Church on Saturday, April 8, for a special vespers program highlighting the importance of caring for vulnerable and endangered animals.

A Cape Vulture indigenous to South Africa, flexed his massive 8.5-foot wingspan to the delight of the estimated 2,500 humans in attendance. Another guest, a 300-pound Galapagos Tortoise named Ladybug had to be carried to the stage by five men. Once she arrived, however, Ladybug munched carrots and walked around like she owned the place. Other animals — including a monkey, a chinchilla, an alligator, some goats, a rat, two or three kinds of snakes, a dog and even a leopard named Cairo — seemed to take their churchgoing experience in stride.

The program represents a collaborative effort between Loma Linda University Health, the children’s ministry program of the church and the Southeastern California Conference of Seventh-day Adventists.

Pastor Shawna Campbell, director of children’s ministry at the church, and William K. Hayes, PhD, professor of biology at the School of Medicine, co-hosted the event.

Campbell and Hayes have been hosting animal programs in church for six years. Campbell believes teaching children about animals helps them learn about the environment and creates awareness of their stewardship responsibilities.

“We want children to be wowed by God’s creativity and amazed by the creatures He has made for us to enjoy and learn about,” Campbell said.

Hayes said the program recruits and educates future generations of animal lovers as ecologists and environmentalists. Beyond promoting environmental education and stewardship from a faith-based, creation-care perspective, Hayes says the programs promote the church, university and medical center and provide healthy, family-oriented social events for the community.

Hayes talked about how habitat destruction by goats, dogs and rats introduced by humans nearly annihilated the population of Caribbean Rock Iguanas and Galapagos Tortoises on the Galapagos Islands a few years ago, and discussed how the American bison, commonly but improperly known as the buffalo, came close to extinction after government-sponsored eradication efforts left less than 1,000 of the giant animals alive to roam the plains in the late 19th century.

There were plenty of oohs and aahs when Pastor Shawna led a procession of several men pulling a barred cart containing the leopard down the center aisle of the church. The magnificent feline looked out at the audience and devoured snacks fed through the bars of the cart by her trainer.

Hayes said that after studying endangered animals for many years, he found the program especially meaningful on a personal level. He stresses the importance of learning that human activity and indifference are the primary causes of threats to biodiversity and ecosystem health.

“Learning about this while seeing live animals and connecting with them can drive that point home more effectively than any other approach,” Hayes said. “We are truly blessed that the church, university and medical center administrators support this unique ministry.”

Campbell and Hayes will bring the next animal vespers to the church in the autumn.

SCROLL DOWN TO SEE A PHOTO GALLERY OF THIS EVENT