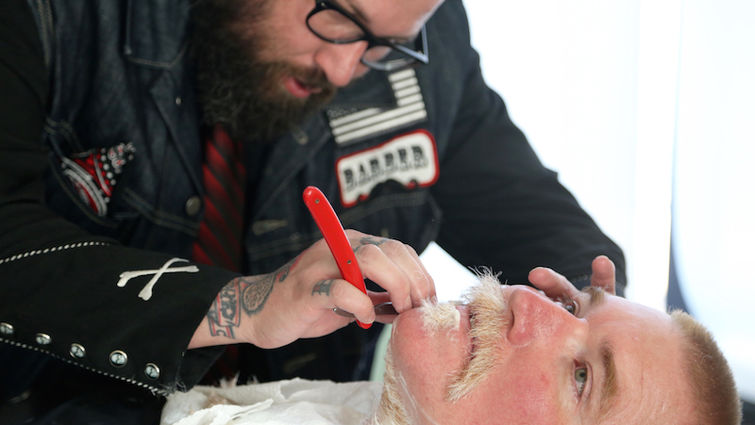 Barbers from Boom Botz Gentlemen’s Parlor offered free shaves to gentlemen who skipped shaving for a month at the conclusion event for No Shave November. SBPD detective Von Verbanic looked fresh and clean after his straight blade shave.

The month of No Shave November has come to an end – and clean shaven faces have now become all the rage.

Loma Linda University Health proudly partnered with the San Bernardino Police Department (SBPD) again this year for the awareness month, during which male and female participants skipped shaving in order to raise awareness about cancer prevention, diagnosis and treatment.

“We are together partners in a very real sense,” Hart said. “Seeing how law enforcement has come together to raise money for cancer research is a true sign of dedication to the community.”

During No Shave November, SBPD as well as Loma Linda employees, students and staff were encouraged to participate in a variety of ways:
• Donate $40 to enter No Shave November and allow their hair to grow wild and free.
• Make a donation to Loma Linda University Health and help fight cancer in the community.
• Donate $10 for a commemorative coin.

SBPD Assistant Chief Eric McBride announced at the event that so far over $17,000 had been raised, which is roughly $5,000 more than last year. The funds will go to Loma Linda University Cancer Center.

After the program, two barbers from Boom Botz Gentlemen’s Parlor, located in Yucaipa, offered free straight cut shaves on site to those men who had participated in the month-long awareness.