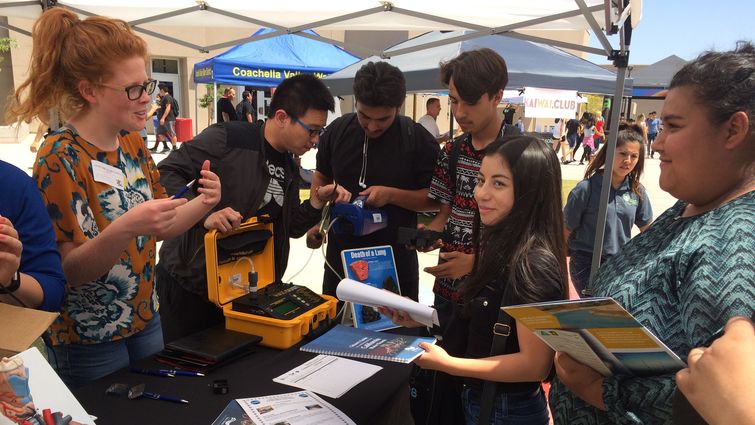 The Eastern Coachella Valley, known as ECV, is located about an hour and half from Loma Linda and is home to more than 80,000 residents. Many of whom are migrant farm workers representing one of California’s largest agricultural regions.

In fact, they represent $526 million in agricultural gross that is currently being grown and supplied to local markets across the state according to the Agricultural Commissioner’s Office, including a large crop of dates.

However, the prevalence of air pollution, water contamination and pesticide exposure is affecting workers and their families living in the cities of Indio, Thermal, Oasis, Mecca and North Shore — all of which comprise the ECV.

Though many are affected, they are unable to seek the treatment they need. Per the California Institute for Rural Studies, 70 percent of employed farm workers living in the ECV are without health insurance.

“If you get high school students on board, it’s more likely you can get everyone else on board, especially in this community,” Westbrook says.

Westbrook and two other graduate students met with some 80 high school students at Desert Mirage High School on April 20 for their Earth Day to shed some light on how the current situation affects their health and how they can participate through citizen science.

Citizen science is often referred to as ‘crowdsourcing’ or ‘volunteer monitoring.’

“It’s a way to give back to your community by collecting scientific data in real time,” Westbrook says.

So, how does one become involved in citizen science? For starters, Dr. Sinclair and Westbrook are encouraging residents to install a PurpleAir sensor in their homes.

These sensors will detect various particulate matters in the air through laser beams. The beams will then calculate either larger dust particles accumulated from the road known as PM10 or tinier particles in the air known as PM2.5 that reduce visibility.

Each sensor must be connected to the internet and have an adequate supply of electricity. Data collected will be transmitted to the PurpleAir site, where it will show every hour the current air quality.

The quality of air is based on an index ranging from good, to moderate, to hazardous. Good will be represented by the color green with very unhealthy as purple and hazardous as maroon.

Individuals are able to see the air quality in their local area, as well as across the country and around the world.

This data is particularly important for individuals living with asthma or other respiratory diseases to monitor their outdoor activities. Children and older adults are at higher risk of developing cardiovascular diseases, lung cancer, stroke and poor lung development. Lower birth rates are also more frequent.

According to the World Health Organization, air pollution is responsible for 800,000 premature deaths every year.

Every week, Westbrook is meeting with community stakeholders to encourage them to support AIResiliency in the Eastern Coachella Valley. “Our goal is to install as many air sensors as we can, especially around the Salton Sea,” Westbrook says.

By early 2018, the Salton Sea will no longer receive the Colorado River’s water to maintain its current shoreline. That will result in an increasingly larger amount of dry lake playa which is estimated to reach anywhere between 75 and 100 thousand acres by the year 2040, according to Audubon California.

Too many students and community members are unware of the harmful dangers currently present. Westbrook would like to see this change through continued education programs and encouraging all to “speak with our local policy makers and advocate for new policies.”

To learn more about how to get involved, contact Dr. Ryan Sinclair at rsinclair@llu.edu or Macy Westbrook at mwestbrook@llu.edu.