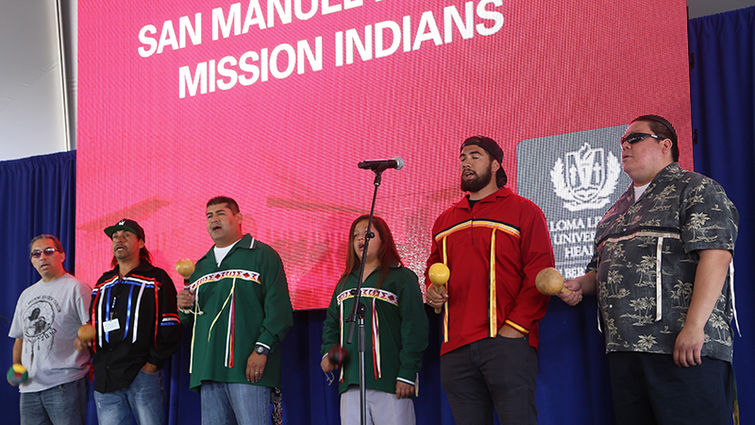 One of the highlights of the June 22 ribbon-cutting ceremony for San Manuel Gateway College and Loma Linda University Health – San Bernardino was the singing of a selection of bird songs by five members of the San Manuel Band of Mission Indians and one from the Cahuilla tribe.

“It’s one of our Serrano songs,” he said, referring to the name used by early Spanish explorers. Serrano translates as “highlander” and refers to the group’s ancestral home in the upland regions of San Bernardino County. The name reflects similarities with the tribe’s own nomenclature.

“Our people from San Manuel are known in our native language as Yuhaviatam,” he added. The name means “People of the Pines.”

Ramos pointed out that the next two songs were Cahuilla bird songs, originating from a related band of Native American Indians who currently live in the Palm Springs and low desert areas. The songs were rhythmic and melodic, sung in unison, and punctuated by the percussive sounds of hand-painted gourd rattles. As the men sang, ladies of the tribe perpetuated an ancient art by dancing to a couple of the numbers.

According to the San Manuel website—found online at http://www.sanmanuel-nsn.gov/Culture/Cultural-Overview—bird songs were taught to the people of San Manuel by Cahuilla elders and are treasured today as links to their native cultural heritage.

“Bird songs are not directly about birds;” the website informs, “rather the songs derive their name from the migration of birds that parallel the movement of people through their territory, telling the story of the creation, animals seen along the way, and sacred places.”

As the bird singer performance came to an end, Ramos honored the tribal elders who have now passed on as well as the Loma Linda University Health providers whose care enabled them to live long enough to share their knowledge of tribal traditions and oral history with younger generations.

“As you can tell,” he concluded, “the traditions are still going.”