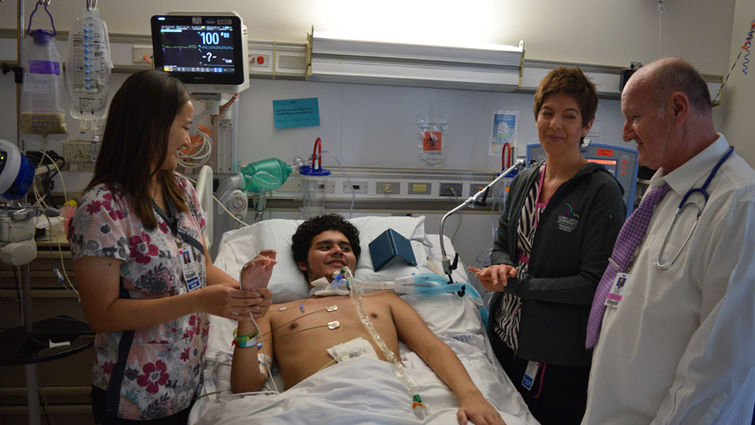 Leo in the hospital at LLUMC

That’s where the therapists at Loma Linda University Health step in. The months of April and May, respectively, celebrate the efforts of occupational therapists and speech pathologists as they seek to help their patients recover as much of normal life as possible. During Occupational Therapy Month 2016, the theme is “Solutions to the Challenges of Everyday Life.” For Better Hearing and Speech Month, “Communication Takes Care” is the theme for 2016.

Meet Leonardo Juarez, better known to his family and friends as “Leo.” Through the end of 2015, Leo was a musically gifted 17-year-old high school student attending Valley View High School in Moreno Valley. He was a bass in the Madrigals, an elite choir at his school, which travels and performs regularly.

However, during the last week of December, Leo began to notice a tingling in his fingers and toes. He also realized that many of his natural reflexes were declining, and that he was having a difficult time moving.

On January 20, 2016, he was admitted to Loma Linda University Children’s Hospital for tests. In the midst of his first hospital stay, Leo celebrated his 17th birthday on January 21. Family and friends were on hand. A group of nurses who had cared for Leo surprised him with a rendition of “Happy Birthday” and a birthday banner. He was released January 22 but was readmitted February 4 for more tests.

“On February 11, he was transferred to rehab at LLUMC–East Campus,” Lorena remembers. “But he became weaker and weaker while in rehab and was readmitted to Children’s Hospital on March 2.”

More tests led to a diagnosis of Lupus Nephritis Stage 5, an autoimmune disorder that damages the kidneys. But the most dramatic impact came with a second diagnosis of Guillain-Barré syndrome, where Leo’s immune system mistakenly attacked myelin coating his nerves, leading to paralysis.

On March 20, Leo became so weak that he was transferred to the intensive care unit (ICU). Too weak to breathe on his own, he spent three weeks in the ICU fully intubated. Physicians performed a tracheotomy to open an airway. “We thought we were going to lose him,” Leo’s mother remembers. “I told him, ‘Leo, you’ve got to fight.’ And that’s what he’s doing.”

Fortunately, his condition improved and he was transferred to unit 5800 on April 8. It’s nearly a week later. Leo is visited by occupational therapists Carrie Jensen, OTR, and Jenny Liu, OTR, as well as Gary Lucas, MS, a speech pathologist. Jensen and Liu check Leo’s ability to control his movement, as well as the feeling in his extremities.

Lucas introduces Leo to Casey Stadig, a sales consultant for TobiiDynavox who manufactures a communication tool using eye movement to control one’s environment. Leo is trying it out for the first time.

“He’ll even be able to text his friends,” Lucas informs Leo’s mother, Lorena. “Oh, great,” she responds in mock parental annoyance. “And he can listen to his music too,” Lucas adds.

In addition to his love for singing in the Madrigals, Leo also enjoys musical artists Mumford and Sons, Edward Sharpe and the Magnetic Zeros, and Eminem—which Lorena teasingly calls his “ugly music.”

What’s Leo’s prognosis? “We are trusting God,” Lorena says. His family, including father Rafael and older siblings Elliott and Olga, as well as Elliott’s wife, Monica, and nephews Jude and Lenny, provide Leo with support during these trying days.

“Maybe he can rejoin his friends in the Madrigals one day,” Lorena adds. Whatever the outcome, therapists like Jensen, Liu, and Lucas are there to help life become as close to normal as possible for Leo, teaching him to adapt to his life as it is, being as independent and able to communicate his feelings, needs, and desires to family and friends.

They are also there to cheer each success for Leo, however insignificant it might seem. For all of their efforts, they are celebrated this April and May.