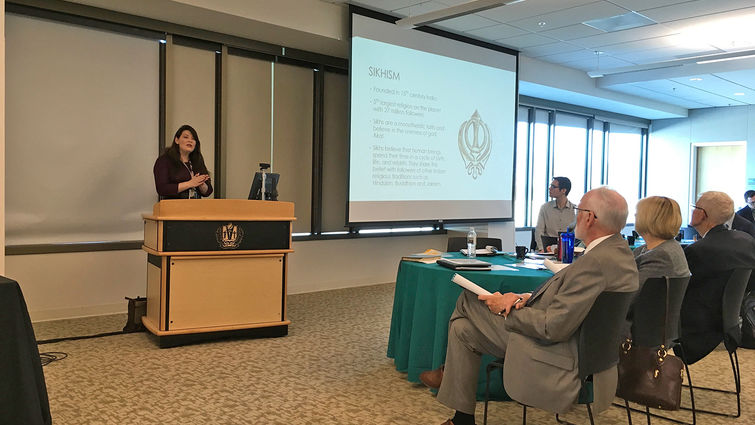 Frank but respectful interreligious discussions proved so fruitful during a “Facing Ethical Dilemmas with Faith” case conference last month that organizers are planning a book and anticipating the event recurring annually.

In a prompt of the day’s open and honest atmosphere, the “Faith at Its Best” keynote by Gerald Winslow, PhD, highlighted three virtues to cultivate for healthy interfaith relations: humility, attentiveness and joy.

“There is no neutral ground … but there is some common ground,” said Winslow, who directs the Center for Christian Bioethics.

Case study discussion filled the rest of the day’s agenda.

The case studies: matters of life and death

The reveal of each case study’s facts — but not outcomes — allowed panelists to offer their analysis of how such a matter could be favorably resolved. Some ended happily.

Case 1: Sikhism and a suicidal teenager

Bullying pushed a young teen girl into depression and suicidal thoughts after she grew facial hair as a result of polycystic ovarian syndrome. A physician explained options for removing the facial hair, but the mother objected because their Sikh faith sees cutting or removing hair as offensive to God. Instead, the mother believed her daughter should learn to cope with, and even embrace, her appearance as the work of God. The doctor argued for a social services consult or mental health treatment, stating that the risk to the teen’s life was of higher priority.

A recent convert to Christian Science took her diabetic young daughter to a school-required physical after the girl told her teacher she was experiencing excessive thirst, nausea and fatigue — signs of potentially fatal diabetic ketoacidosis. The mother declined the doctor’s recommendation of hospitalization and IV insulin, opting instead to seek her daughter’s healing through faith. Within three weeks, the daughter lost consciousness at school and was taken by ambulance to the emergency room, where she was admitted.

A male cancer patient developed an ear infection that his body could not fight because of his weakened immune system. The infection abscessed to his right temporal brain lobe. The doctor ordered antibiotics, but the patient refused. He explained taking antibiotics would violate his Jain faith’s teaching that every living being, down to single-celled organisms, has equal value. The physician requested an ethics consult.

A woman who needed surgery to remove her gall bladder asked the doctor how the organ would be disposed of. Incineration was his answer. She explained this went against her religion’s belief that fire is a sacred symbol of God and should not be polluted with dead matter. Instead, she asked if she could have the tissue returned to her to dispose of in a manner acceptable to her faith. Laughing, the doctor said it wasn’t possible. The patient stated she would decline the surgery if she couldn’t be ensured of the organ’s proper destruction.

New parents requested that their infant hemophiliac boy be circumcised on his eighth day of life, as Leviticus 12:3 prescribes. The medical staff cautioned against this due to the baby’s risk of excessive bleeding. Undaunted, the parents believed God would protect their son because they were acting in faith. Two physicians refused to do it as a violation of their Hippocratic Oath. A third physician agreed. The case was sent up to the hospital ethics committee for a final decision.

After the panel discussion for each case, audience members were invited to ask questions or state their viewpoints.

“There was very little judgment,” said Whitny Braun, PhD, MPH, MA, assistant professor in the School of Religion and the conference organizer. “Differing opinions were discussed in a healthy way, based on pragmatism rather than criticism of one another’s faith.”

The reveal of the case outcomes included sad news. Two of the cases ended in death. Sticking with his decision to refuse antibiotics, the cancer patient of Jain faith died from the ear infection that had abscessed to his brain.

Not given a choice was the hemophiliac newborn boy. The hospital allowed a willing physician to circumcise the child at his Evangelical parents’ insistence. The baby bled unstoppably and died three days later from renal failure.

The other two cases involving children were resolved via compromise in one case and the legal system in the other. The teenage “Bearded Lady,” as bullies had called her, was allowed by her mother to undergo facial hair removal treatment with the caveat that she begin to wear a turban to show her devotion to Sikhism. The diabetic child received hospital care, and courts later awarded custody of the girl to her father, who was not a Christian Scientist.

Resolved most easily was the Zoroastrianism woman’s request to have her removed gall bladder returned to her following surgery. The doctor, it turned out, was misinformed that she would not be allowed to do so.

Lastly, one case ended in mystery. The Muslim man struggling with the decision of how to have his sperm collected to start a future family never returned to the doctor’s office.

“Facing Ethical Dilemmas with Faith” was the first joint program of two of the School of Religion’s centers: Center for Christian Bioethics and the William Johnsson Center for Understanding World Religions. Organizers and panelists plan to turn their enthusiasm into a volume of essays about the case studies, and the conference may become an annual event.

“The conference is a great forum for inviting faith leaders together to discuss the importance of spirituality and healthcare,” Braun said.