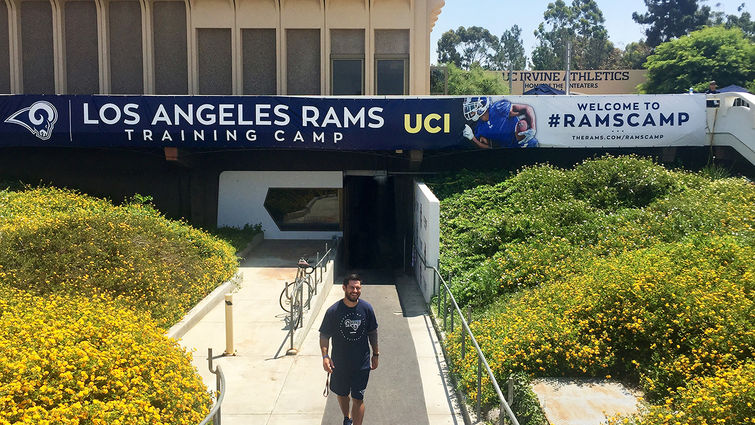 For sports fan Jesse Gutierrez, getting paid to attend two Los Angeles Rams summer training camps while fulfilling the practicum requirements for his MPH degree at Loma Linda University School of Public Health was better than a dream come true.

Not only did the 29-year-old nutrition and dietetics student get to work with top NFL athletes during the 2017 and 2018 camps, but he also demonstrated that nutritional counseling makes a difference on the field.

Because of the players’ hectic schedules, Gutierrez never got to address the team at one time. Instead, he showed up at 6 a.m. each day and left as late as 9 p.m., talking with players as they arrived, took breaks, ate meals or pumped iron. His message? What you eat affects your performance.

The results substantiate the claim. Initially, there are 89 players on the roster, but when training camp ends three weeks later, there are only 53. Gutierrez was happy to learn that players who made the cut had received the most nutritional counseling. “While it is difficult seeing any athlete cut, it was encouraging to see the immediate results of the nutritional counseling,” he said.

“It was encouraging to see the immediate results of the nutritional counseling,”Jesse Gutierrez

Born the son of ardent sports fans, Gutierrez says his family is united in their love for football, if not their team allegiance. “My little sister roots for the Patriots, my dad for the Cowboys, and my mom for the Steelers,” he says. “Personally, I like the Rams and the Jets.”

Gutierrez, who first became excited about sports nutrition after taking a class in the subject, often wears Rams regalia around campus. Even so, when it came time to find a venue for his sports nutrition internship, he contacted local sports franchises like the Ontario Reign, Rancho Cucamonga Quakes and Inland Empire 66ers. His hopes were dashed when they all informed him that they didn’t offer a nutrition internship. An online search, however, revealed that the Rams did.

The odds seemed daunting — dozens of talented students must surely be vying for the position — but Gutierrez knew he had to try, so he filled-out the application, sent it in, and was called in for two interviews.

A few days later, Gutierrez discovered a message from the Rams in his inbox. “Congratulations!” it said. “I was absolutely ecstatic!” he says. “I was nervous at the start, I thought I would be star struck. But everyone was down-to-earth and open. Honestly, they are really great people!”

“I thought I would be star struck. But everyone was down-to-earth and open. Honestly, they are really great people!”Jesse Gutierrez

NFL players often develop an increased risk of high blood pressure and elevated heart rate five years after their football careers end, Gutierrez says. “My purpose was to educate them on how diet can have an immediate and long-term impact on their health and performance.”

Brimming with enthusiasm, Gutierrez began to share his knowledge with the athletes. “Players who eat beets right before a game,” he told them, “have better muscle oxygenation and blood flow. Dehydrated players suffer increased muscle cramps and injuries, both of which are huge concerns in the NFL.”

When the camps ended, several players told Gutierrez they played better when they followed his advice, he says. The feedback influenced his plans for the future. Regardless of the long days and hard work, the positive impact he was making on the athletes and the organization made him want to turn sports nutrition into a career.

Like Gutierrez, other LLU students found creative ways to fulfill their practicum hours this summer.

Hannah Hughes and Josie Perez tackled a drinking problem in which sugar, not alcohol, is the villain. The two worked to support SB 1192, the Healthy-by-Default Kids’ Meal Drinks Bill, that will require restaurants to offer water or milk in children’s combo meals instead of sodas or other sugary beverages.

While Hughes gathered pledges from more than 1,100 children who vowed to go soda-free for the summer, Perez worked with health-policy aspects of the bill and helped local restaurants get ready for when it becomes law. They rejoiced when the California legislature passed the bill, which awaits the signature of Gov. Jerry Brown.

Elizabeth Montes, who graduated this June and recently accepted a position at Riverside City College, worked with the Lewis-San Antonio Healthy Communities Institute in Upland, California, to develop programs that use ‘promotores,’ community health workers in Spanish-speaking neighborhoods. “My practicum prepared me to feel confident in developing programs and conducting needs assessments,” Montes said.

Gutierrez, meanwhile, is convinced his education paved the way for his success. “The things we are taught at Loma Linda University School of Public Health have potential to make a huge difference in people’s lives,” he insists.

“The things we are taught at Loma Linda University School of Public Health have potential to make a huge difference in people’s lives,”Jesse Gutierrez

He also says his nutritional internship with the Rams was more fun than work.

“I want to become a dietician for a professional sports team after graduation,” he says.