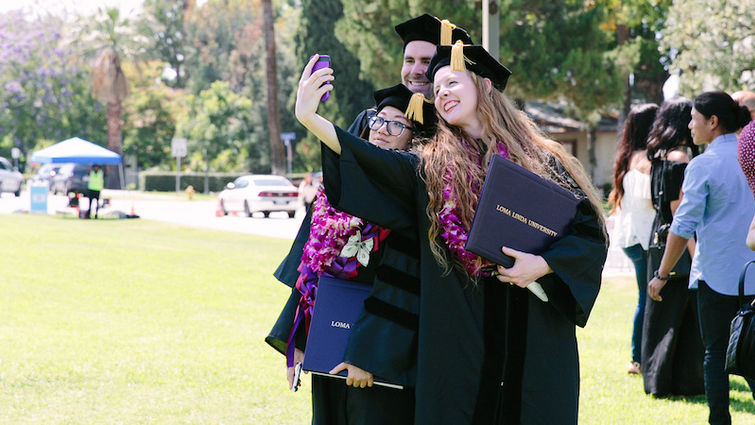 LLU School of Pharmacy graduates stopped to take a joyful selfie after the ceremony.

The newest generation of pharmacists has been crowned at Loma Linda University School of Pharmacy. On Sunday, May 28, 82 faces full of joyous expressions made their momentous walk down the campus lawn celebrating the conclusion of their four-year journey at the school.

Loma Linda University Health President Richard H. Hart, MD, DrPH, welcomed the graduates and their families and friends with pride. “We are proud of our graduates and what they mean to this university but also to the world at large,” he said. “They have served well, they have worked hard, and now it is their moment of glory.”

In her address, commencement speaker Mary Ann B. Kliethermes, PharmD, of the Chicago College of Pharmacy at Midwestern University, offered three reminders for the road ahead to the graduates.

“First, find your passion in pharmacy, and you will enjoy every day in your life,” she said. She later quoted former President Barack Obama, saying “‘listen to understand rather than listen to respond.’” Finally, “stay invested in the education you’ve been given.”

Five of the 82 graduates and three faculty members were immediately recognized during the ceremony with various awards, presented by the dean of the School of Pharmacy, Noreen Tompkins, PharmD, BCPS-AQ ID, and university provost, Ron Carter, PhD.

Mia Choi, Mission Excellence Award: In her application to the university, Choi stated, “I was not placed on this earth to be insignificant and live my own life. Rather, I am here to be God’s soldier and carry out his wishes.” She went above and beyond that calling by participating in multiple outreach programs locally and also internationally in Argentina, Honduras and Brazil. “Mia has demonstrated through her actions the desire to do God’s work here on earth,” Tompkins said.

Grace Shinn, Mission Excellence Award: Shinn said that volunteering and helping others gives her a sense of purpose and helps her to grow spiritually. She has held a variety of student leadership roles including in the California Pharmacist Association Student Chapter and vice president for the school’s class of 2017. She participated in local outreach and internationally in India and in Brazil, where she ran the pharmacy and performed patient counseling for the mission clinic.

Alexandria Taylor, Wil Alexander Whole Person Care Award: Living out her commitment to launch new outreach and initiatives, Taylor is passionate about helping people on and off campus. She had the most community service hours in her class in all of 2015 and 2016. “If past behavior is indicative of the future, Alex will continue to invest her personal time in the pursuit of improving the conditions of others,” Tompkins said.

Allison Uniat, Dean’s Award: Uniat demonstrated maturity and outstanding service, always going out of her way to help others. Tompkins quoted her as saying, “Community service has taught me that I can make a difference in the lives of my patients.” It is this passion that has empowered people to improve their health.

Shawn Robert Smith, President’s Award, the highest award given to any graduate for superior academic achievement, student life and service to the highest ideals of the university. Carter noted his extraordinary commitment to academics and student life as president of the School of Pharmacy Student Association for all four of his years, and “his role as a spiritual care leader was very evident.”

Rashid Mosavin, PhD, MBA, RPh, Distinguished Service Award: Given to a faculty member for exemplary service. Mosavin, the executive associate dean for the school, has given, according to Tompkins, “seemingly endless” service during his 13 years with the school, dedicated to the growth and success of the program and students.

Dekabo Saba, PharmD, RPh, BSRT, RCP, Alumnus of the Year: Born and raised in Ethiopia, Saba made a mission to change lives one person at a time. After graduating from the school in 2007 he returned to Ethiopia for several years and focused on education by providing guidelines for certain disease states to pharmacists and other health care professionals in Africa, teaching them how to manage, treat and prevent diseases. With assistance from many Seventh-day Adventist donors in the United States, Saba developed a brand new, one-of-a-kind pharmacy in Ethiopia with current technology and equipment.

Ruben Tejeda, Distinguished University Service Award: An award that typically goes to faculty, administrators or board members instead this year recognized an unsung hero whose professional achievements have had an exemplary impact on the operations of the School of Pharmacy. For more than 20 years Tejeda has impacted multiple areas of the school, specifically in the area of records.

On the eve of commencement, the School of Pharmacy conducted a baccalaureate service, allowing students and their families to reflect on the ways God has blessed their academic efforts as they embark on the next chapter of their careers.

Michelle Montelongo looked back at her journey as if it were yesterday: “I can say I am not the same person I was in 2013. Even though the journey was far from easy, I can say it was worth it. Loma Linda University has helped me grow spiritually.”

This year’s service baccalaureate service, held in the Loma Linda University Church on May 27, featured students’ personal reflections about their educational journey.

Stephen Choi remembered his first year as being the most difficult, when obtaining a life balance was challenging.

“During that first year I developed a prayer I said before every test, every presentation and every interview,” he said. “That prayer will stick with me all my life. It’s never failed me, and the Lord Jesus Christ has never failed me:

Choi’s prayer: “Lord, if your plan is for me to be a pharmacist and to serve you, I need your help. I can’t do this on my own. Please be with me today.” 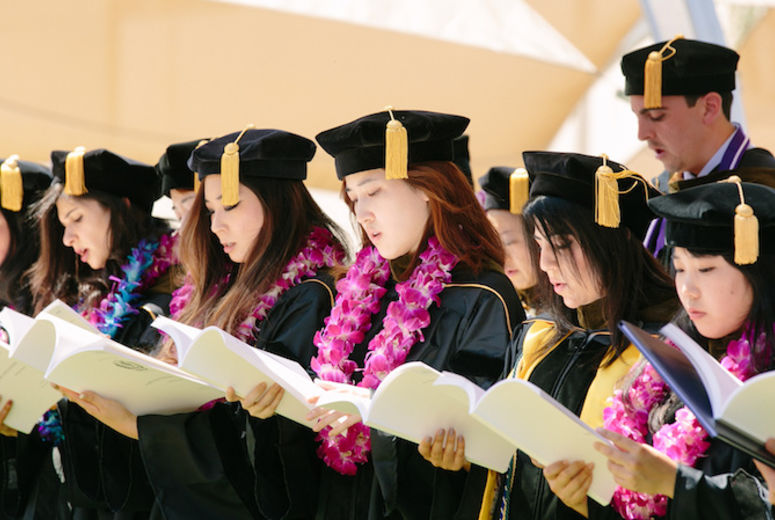 Graduates read aloud the Oath of a Pharmacist 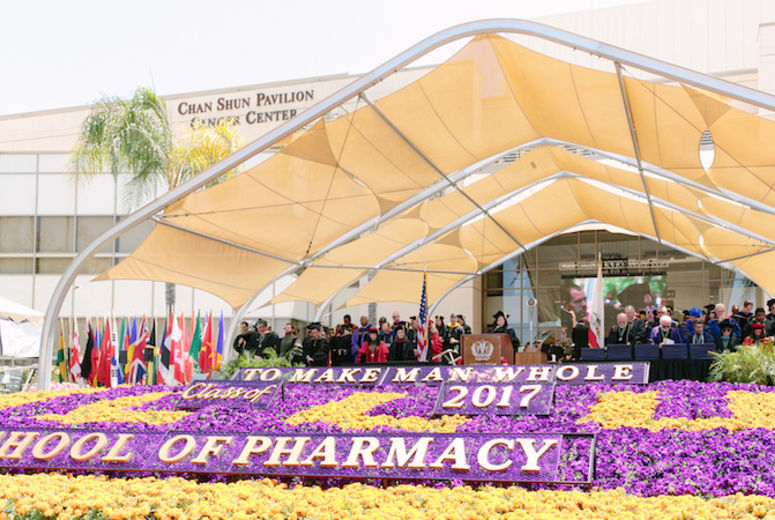 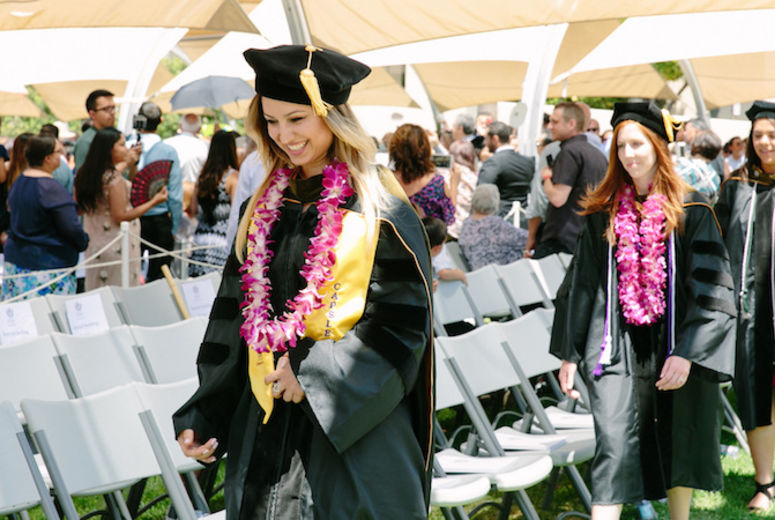 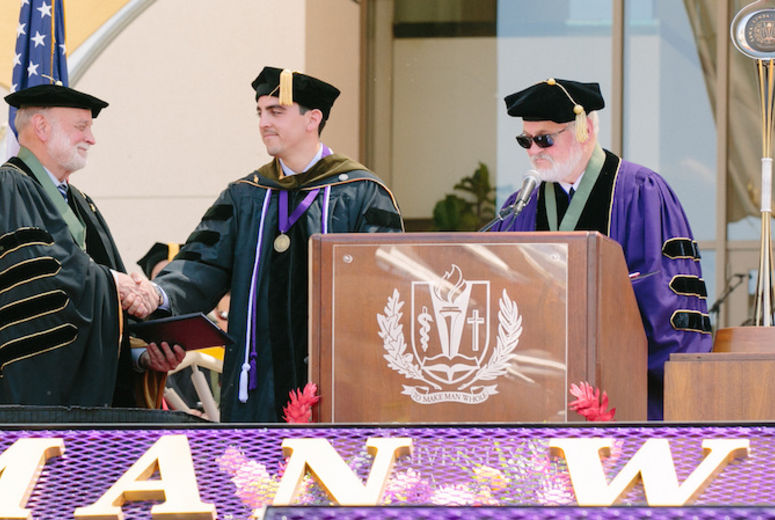