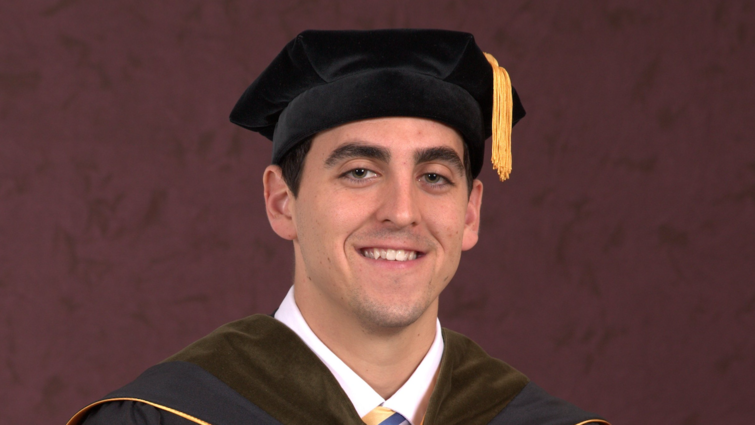 Shawn Smith received the Loma Linda University President’s Award for the School of Pharmacy at the school’s commencement ceremony on May 28.

For four years he earned a place on LLU’s Dean’s List or Honor Roll every quarter. And for four years he served as class president of LLU’s School of Pharmacy. Smith recently shared his thoughts on his time at the university.

“I often tell people that there is no institution I would rather be attending because of the people who practically live out the teaching and healing ministry of Jesus Christ,” he said in an LLU Health News interview.

An outstanding scholar and athlete, Smith has devoted himself to the service of others. He was a member of Rho Chi, the international honor society for pharmacy students. As a third-year student, he served as the group’s treasurer.

On its website, Ro Chi says being a member “is a privilege accorded to the very few who distinguish themselves by their academic and professional achievements.” Members aspire to Rho Chi’s mission, which includes promoting the “highest ethical standards” and a life of service.

Among his service commitments at LLU, Smith helped launch a mentoring program to help support incoming students in the Pharmacy Student Network. The program connects new students with year-two mentors. He also represented the School of Pharmacy students’ interests on the dean’s search committee.

He was a volunteer medical missionary in Students for International Mission Service (SIMS) on mission trips to Romania, Belize and Brazil. During SIMS mission trips, doctors refer those in need to partner hospitals and clinics of Adventist Health International.

Smith hails from Harrisburg, Pennsylvania, where he grew up with his parents, Bob and Lisa Smith. He previously attended Bloomburg University in Pennsylvania, majoring in biochemistry.

A star offensive lineman on the Huskies football team, he was honored as a Bloomburg Scholar-Athlete. He was on the offensive line that set the Pennsylvania State Athletic Conference single-season rushing record with 3,789 yards.

Earlier, at Central Dauphin High School in Harrisburg, he was a four-year honor roll student. He was also team captain of both his high school football and basketball teams.