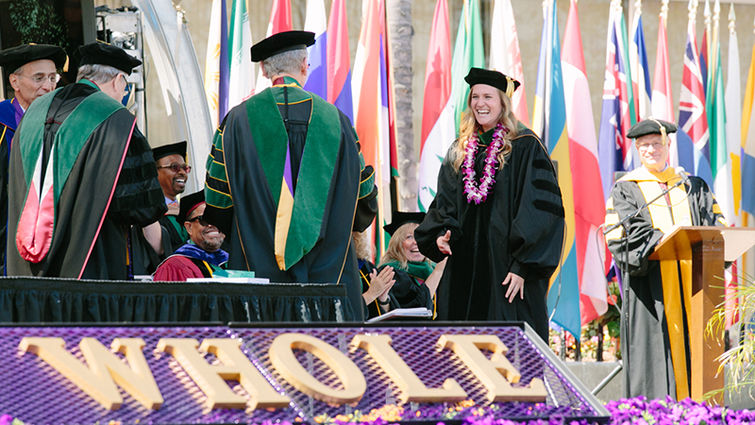 Loma Linda University’s School of Medicine’s commencement service celebrated the academic excellence of each of the 177 students receiving degrees. However, for one graduate, the day included a major surprise.

The School of Medicine is the only institution in the Western United States to produce 11,000 graduates, and one of only a handful of schools nationwide.

“Each year we graduate outstanding physicians,” said Roger Hadley, MD, dean of the School of Medicine. “Our graduates make an impact on people’s health around the world, just as they have every year since we began in 1909. Our mission today is just the same as it was more than 100 years ago.”

Two graduates reflected that heritage of service. Jonathan Burden is a descendant of John Burden, one of the founders of Loma Linda University in 1905, and the fourth generation of his family to graduate from the School of Medicine and its precursor, the College of Medical Evangelists. Jonathan Gaskill is a fifth-generation graduate of the school.

Kate Phelps, senior class president, shared a number of memories and thanks for her class’s time at the School of Medicine.

“I have nothing but excitement and joy this morning as I think of you living out your next big chapter,” Phelps said.

Amy C. Hayton, MD, clerkship director for internal medicine at the School of Medicine, addressed the graduates on the theme “You Were Designed for This!”

“Today it’s easy to affirm why you came to medical school. Today you are in touch with your vision and your purpose,” Hayton said. “God has uniquely designed you to be courageous healers.

“I have watched many of you being courageous,” Hayton related. “Acknowledge your past victories. Get inspired. Remember the things God has done for you and know that he will remain faithful to do it again."

Each year the university conducts a baccalaureate service in the center of the commencement weekend for School of Medicine graduates. The service allows students and their families to reflect on the ways God has blessed their academic efforts to become physicians.

“It’s particularly meaningful that buildings in the center of our campus, the Campus Hill and the University churches, symbolize the Christ-centeredness of our academics,” said Ronald Carter, PhD, university provost.

This year’s service, held in the Loma Linda University Church on May 27, featured students’ personal reflections about their educational journey.

Whitney Evans shared a time when she faced serious doubts about her ability to complete her medical education.

“Seven years deep into the PhD-MD program, I desperately wanted to return to med school to complete my final years. I felt trapped, and doubted if I had what it took to complete what God wanted for me,” Evans said. “It wasn’t until I saw God for who He was, and not what he could do for me, that I experienced the peace and power of a life surrendered.”

Dalia S. Gridley, PhD, School of Medicine Distinguished Service Award: A distinguished international scholar, Gridley’s research topics include cancer therapy, radioprotectants of normal tissues, and immunological studies on mice submitted to the International Space Station. She has authored or co-authored hundreds of articles, manuscripts and book chapters. She is professor in the Department of Basic Sciences, Division of Radiation Research, and Division of Microbiology and Microbiology and Molecular Genetics.

Melissa Y. Kidder, MD, School of Medicine Distinguished Service Award: A member of the School of Medicine’s class of 1994, Kidder has been a faculty member in the Department of Gynecology and Obstetrics since 1998. She was appointed department chair in 2014, the first woman to hold that position. Her keen interest in postgraduate education led to her involvement as assistant program director and later director of the Obstetrics and Gynecology Residency Program.

Henry K. Lamberton, PsyD, School of Medicine Distinguished Service Award: Lamberton serves as the School of Medicine’s associate dean for student affairs. He also teaches medical students through the School of Religion, and coordinates Orientation to Religion and Medicine, a class co-taught by physicians and School of Religion faculty. His research examines the role of spirituality in medicine, and he has made numerous presentations at regional and national conferences on student life and well being.

David B. Cotton, MD, University Alumnus of the Year: Cotton is founder, president and CEO of Meridian, the largest Medicaid managed-care organization in Michigan and Illinois. He is also a nationally recognized specialist in maternal fetal medicine. His research has been published in 176 peer-reviewed papers, 38 book chapters, 6 books, and 226 abstracts. He is a member of the School of Medicine’s class of 1974.

Wolff M. Kirsch, MD, Distinguished Investigator Award: Kirsch has directed the Loma Linda University Neurosurgery Center for Research, Training, and Education since 1998. He has been instrumental in obtaining $10 million in research grants, and has secured more than 40 U.S. and international patents.

Anthony J. Zuccarelli, PhD, Distinguished University Service Award: Zuccarelli serves as associate vice president for research affairs and dean of the Faculty of Graduate Studies. He has played a key role in the development of the university’s graduate education and development of a vigorous research culture for more than 40 years.

The school also paid tribute to Leonard Werner, MD, who is stepping down as senior associate dean for medical student education after 34 years. During his service he impacted the lives of 40 percent of the total number of School of Medicine graduates. He will continue to teach.