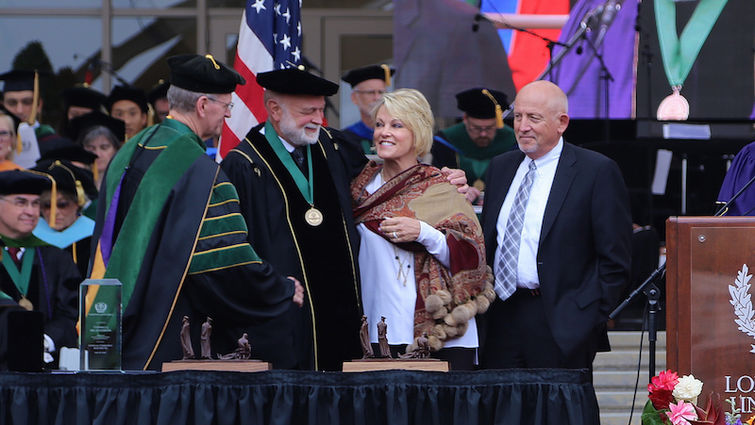 Steve and Cathy Kienle (right) of Walter’s Automotive Group were presented with the Distinguished Humanitarian Award at the LLU School of Medicine graduation ceremony Sunday, May 29. From left, Drs. Roger Hadley and Richard H. Hart presented the award.

Graduates of Loma Linda University School of Medicine weren’t the only individuals called to the stage during commencement ceremonies Sunday, May 29. Steve and Cathy Kienle of Walter’s Automotive Group were awarded with the Distinguished Humanitarian Award for their exemplary service and philanthropy, as well as for inspiring and challenging others to model the mission of Loma Linda University Health (LLUH).

As true champions for children, the Kienles have, for the past 20 years, hosted the annual Walter’s Children’s Charity Classic benefiting Loma Linda University Children’s Hospital. The event has raised over $4 million, supporting a broad spectrum of critical areas. They have also committed funding to LLUH’s philanthropic campaign Vision 2020, specifically for the Children’s Hospital expansion.

“It’s inspiring to see the passion the doctors, nurses and staff at the hospital show for their young patients,” said Mrs. Kienle, “a passion to serve and help, which is contagious.”

Mr. Kienle humbly stated that their benevolence wouldn’t be possible if it weren’t for the generous sponsors of the Walter’s Charity Children’s Classic. “It’s awesome to see the community come together to fulfill a mission of helping and healing children.”