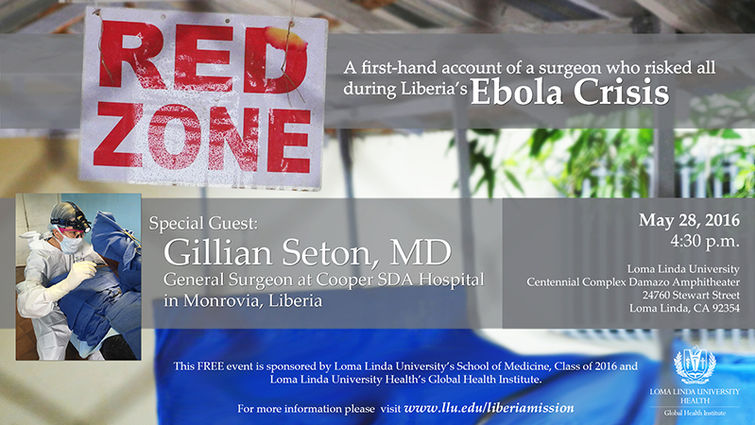 Loma Linda University School of Medicine's class of 2016 will host a special presentation on the 2014 Ebola crisis in Africa. The talk will take place Saturday, May 28, at 4:30 p.m. in the Centennial Complex’s Damazo Amphitheater.

Gillian Seton, MD, the School of Medicine 2016 commencement speaker, will share her story of working as a deferred mission appointee at Cooper Seventh-day Adventist Hospital in Monrovia, Liberia.

Seton began her journey early in 2014 shortly before the Ebola outbreak erupted. No sooner had she begun to settle in when the virus rapidly spread throughout Liberia and several of the surrounding countries, totaling over 28,000 suspected, probable and confirmed cases of Ebola, of which 10,678 were in Liberia.

Despite the opportunity to pack up and leave, Seton declined recommendations to return to the safety of the U.S. Instead she fought to keep the hospital operational. She insisted on staying even when the referral was made to close the hospital doors to the public. Seton believed the value of remaining open outweighed the danger of remaining in the country. With hard work, determination, and grit provided by Seton and her local team of health care professionals, Cooper remained open as a non-Ebola treatment facility where it served as the only hospital to remain open to non-Ebola illnesses in the country when all other hospitals were transformed into Ebola treatment centers.

Rewind to 2013, nearly three years ago, when the class of 2016 elected to adopt Cooper as its class project. Since that time, the class members have done extensive fundraising, much of which went toward supporting the needs of the hospital during the peak of the Ebola outbreak. Since taking on the project, the class has raised over $60,000 and is hoping to continue supporting the hospital in the future even beyond graduation.

This Saturday afternoon event will be filled with stories of struggle and hope as Seton relives her experience and shares why she chooses to continue serving today.