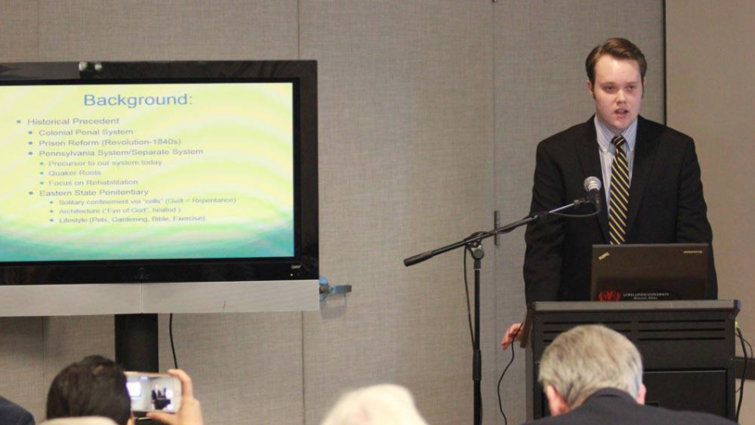 Ryan Marais presents research on the ethics of healthcare in the American prison system at One Homecoming in March.

While at Loma Linda University, Marais began research on health care delivery in the U.S. prison system. This summer he will join School of Religion faculty members Whitny Braun, PhD, MPH, MA, and Alex Dubov, PhD, in presenting papers on that topic at the International Bioethics Retreat and the Cambridge Consortium for Bioethics Education in Paris, France.

At the School of Religion Research Expo in early 2017, Marais discussed the research, which includes collecting case studies of people who have committed crimes to get into prison, or get back into prison, to have access to health care.

Prisoners in the U.S. are the only citizens with a Constitutional right to health care, he said. When the prison releases them from custody, they lose this right. Sometimes they engage in offenses to return to prison and continue their medical care.

“So we’d like to leave you with this question,” Marais said. “Is it ethically appropriate to make access to medical treatment an incentive to commit crime?”

In addition to his work on U.S. prison bioethics, he has researched cardiac rehabilitation, transgender health, and the ethics of expressing uncertainty in clinical settings.

While pursuing his bioethics degree, he also worked at the university’s Center for Christian Bioethics. The center offers guidance and insight on ethical issues in medicine for health professionals and families. The focus is to improve patient care and the health of the public.

A graduate of Mesa Grande Academy, a Seventh-day Adventist K-12 school located just 16 miles from Loma Linda, he later studied at the University of Washington in Seattle. He transferred to studied in Spain for a year before transferring to Walla Walla University in Eastern Washington for the remainder of his undergraduate studies.