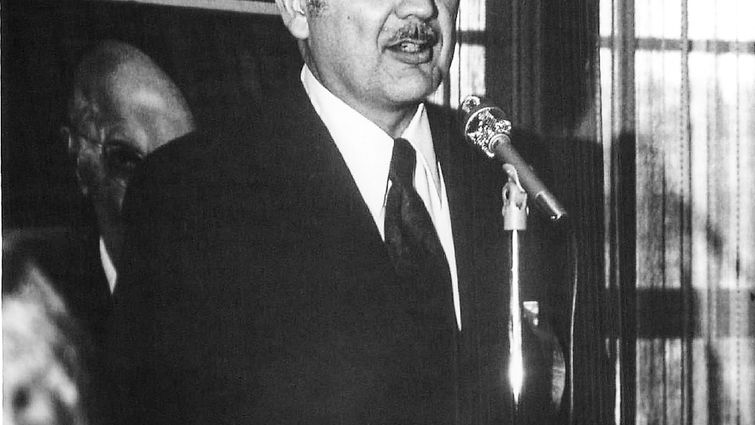 David B. Hinshaw, Sr., MD, the former dean of Loma Linda University School of Medicine who spearheaded the drive to move the clinical faculty from Los Angeles to the Inland Empire in the 1960s and build Loma Linda University Medical Center on its current site, died Wednesday, Oct. 30 in Ann Arbor, Michigan. He was 95.

Known for his tough resolve, Hinshaw worked tirelessly on the medical school’s consolidation efforts at a time when the majority of his colleagues wanted the school to establish permanent operations in Los Angeles.

The issue of separate campuses was a holdover from the early 20th Century, when most American medical schools taught science on rural campuses and clinical education at large urban hospitals. But in the 1930s, the accrediting agency, the Council on Medical Education, began pushing schools to consolidate everything in one location.

This created a decision point for Loma Linda University, then known as the College of Medical Evangelists, or CME. It had been teaching basic sciences in Loma Linda and sending medical students to Los Angeles for clinical rotations at the 3,100-bed County Hospital and much smaller White Memorial Medical Center, a Seventh-day Adventist facility.

World War II put the issue of consolidation on hold for the next two decades, but when Hinshaw became dean in 1962, the council was threatening to withdraw accreditation unless the school consolidated operations.

Los Angeles seemed the obvious choice to many. The clinical faculty and alliances with both hospitals were already in place, and the Seventh-day Adventist Church had recently upgraded clinical facilities at White Memorial.

A flashpoint erupted in January 1963 when accreditors from the Council on Medical Education voiced strong opposition to the board action to move to Loma Linda. But after the dean spent two days with them in Los Angeles and two more in Loma Linda, some surveyors appeared to change their minds.

The breakthrough came when Hinshaw took the group to a home in the Loma Linda hills and pointed to an orange grove in the valley below. “That’s where the new Medical Center will be built, and it will be built for you men to see the next time you come,” he told the accreditors, according to the 2010 book The Glory of the Vision by Loma Linda University Health historian Richard A. Schaefer.

Once he had the support of the Council on Medical Education, Hinshaw rapidly consolidated the school in Loma Linda. He also kept his word to the surveyors: Loma Linda University Hospital (now Medical Center) opened for business on July 9, 1967, providing the clinical facilities the school needed to replace operations at the two Los Angeles hospitals.

Born November 24, 1923, in Whittier, Calif., David Burdg Hinshaw moved with his parents to an avocado ranch in Vista, a small town in San Diego County, when he was 5. His father, a carpenter and contractor, and his mother, a women’s voting rights advocate, provided a good life for the family, even during the Great Depression.

After graduating with an MD degree from CME in 1947, Hinshaw served as a captain in the U.S. Army Medical Corps from 1948 to 1950 and completed a four-year surgical residency at the Veterans Administration hospital in Portland, Oregon, in 1954.

Hinshaw returned to CME in 1954 as an instructor of surgery on the Los Angeles campus. His responsibilities involved supervising surgical residents at Los Angeles County General Hospital and White Memorial Hospital.

The popular young teacher was appointed assistant professor of surgery in 1957, professor in 1961 and chair of the department that same year. In 1962, he was named dean of the School of Medicine, a position he accepted on condition that he be allowed to continue as chair of surgery.

After resigning as dean in 1975, Hinshaw became chief of surgery at the Jerry L. Pettis Memorial Veterans Administration Hospital (now Medical Center) from 1977 to 1982. From October 1982 to January 1984, he served as dean of the Oral Roberts University School of Medicine in Tulsa, Oklahoma. In February 1986, he returned to California to become both vice president for medical affairs at Loma Linda University and president of the Medical Center and Adventist Health Systems/Loma Linda.

At the height of his career, Hinshaw belonged to 14 professional societies. He served as president of the Southern California chapter of the American College of Surgeons in 1968 and 1969 and was a Governor of the American College of Surgeons from 1980 to 1982. He authored or coauthored 100 published scientific articles and was inducted into the Alpha Omega Alpha Honor Medical Society.

All three of his children followed their father into the practice of medicine: David B. Hinshaw, Jr., MD, is chair of radiology at Loma Linda University School of Medicine, Kathleen M. Hinshaw, MD, is retired, and Daniel B. Hinshaw, MD, is professor emeritus and surgical consultant in palliative medicine at University of Michigan.

Hinshaw’s wife Mildred preceded him in death in 2002. He is survived by three children, six grandchildren and two great-grandchildren.