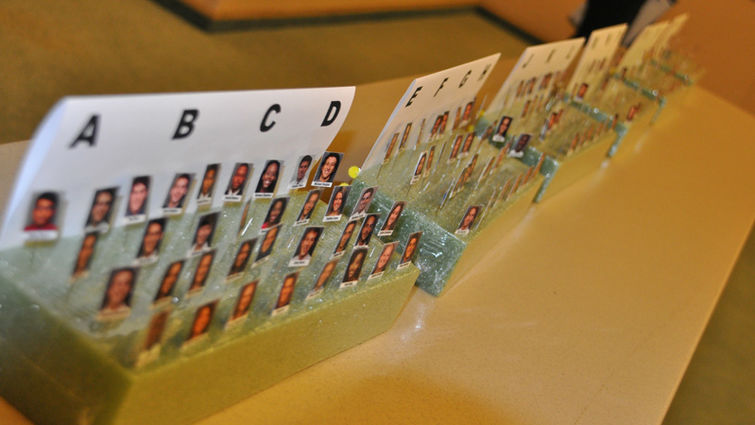 Imagine that a computer somewhere in the United States decided where you were going to be for the next three or more years of your life.

For 168 members of the School of Medicine class of 2016—and their families and loved ones—that very scenario played out during Match Day, March 18, 2016, at 9:20 a.m. Across the U.S., similar scenes took place at many other medical schools.

For the past several years, leaders in Loma Linda University School of Medicine have chosen to create a major event to celebrate the accomplishments of their senior class. This year, Match Day festivities were held in Wong Kerlee International Conference Center, located in the lower level of Coleman Pavilion. The School of Medicine is headquartered one floor up.

The room was packed. Students, spouses, children, and—in some cases—parents were on hand to witness the spectacle. After some brief announcements, the name of each student was alternately read by Tamara Shankel, MD, associate dean for clinical education, and Daniel Wongworawat, MD, assistant dean for career advisement.

Classmates cheered as each senior medical student received an envelope sealing his or her future for the next few years and impacting the rest of his or her life. The envelopes had been shuffled to make the order random.

When all of the envelopes had been distributed, the group took part in a salutary toast—with sparkling apple cider naturally. Then, all at the same time, the envelopes were ripped open and seniors erupted into shouts, screams, tears, and smiles.

This was the culmination of weeks of effort. During the months of November, December, and January, senior medical students criss-crossed the country, interviewing at multiple residency sites per invitation. When the travel was over, students and residency programs ranked each other and a mystical computer somewhere in the country compared those rankings, matching the best picks of students with programs.

The results cannot be challenged. Students go where they are matched, and programs accept them as the incoming residents. Period.

So how did Loma Linda University School of Medicine students fare in the grand scheme of residency education? In line with a growing need for primary care physicians in the U.S., the School of Medicine came through with 44 percent—19 percent internal medicine, 12 percent family medicine, and 13 percent pediatrics.

The journey is far from over for the class of 2016 and families. Written—and in some cases oral—board examinations loom on the horizon. Further subspecialization may follow as their careers develop. They will be probably be “newbies” several more times, asked to learn new systems and ways to practice the art of medicine.

Each senior medical student received a box of matches. Class president ______________ explained that they are being asked to “share the light” of what they’ve learned at Loma Linda University with the rest of the world: whole person care that will not only transform the lives of their patients, but change them as well.