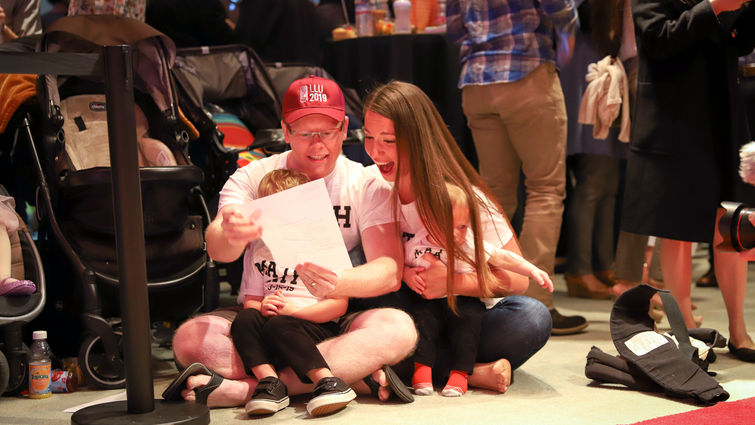 This morning at precisely 9 a.m., medical students all over the United States ripped open long-awaited envelopes to reveal the location where they will be spending their residency — the final step in their training to become a doctor. For Loma Linda University School of Medicine, the scene was electric with the energy and even the theme of a basketball league draft.

A total of 151 students participated in the school’s Match Day this year and are headed to some of the nation’s most prestigious programs, including Mayo Clinic Rochester, Stanford and Massachusetts General Hospital.

Match Day is a life-shifting event for graduating medical students. Each year, on the third Friday in March, fourth-year students find out where they will be fulfilling their residency and complete training in their chosen field of medicine, or specialty.

For the last year, these fourth-year students have been traveling across the nation to interview for residency placements. Both students and organizations submit a list of names to the national matching service ordering their preferred choices. The matching service used these lists to calculate a match list for placing medical students with specific residencies.

This morning, starting at 8:45 a.m., students were called up one-by-one to the stage at the Wong Kerlee International Conference Center to receive their envelope. They picked up their envelope and also grabbed a 2019 School of Medicine draft cap before walking back down a red carpet between velvet ropes under event lighting.

Students adopted a variety of positions while awaiting 9 a.m. Some sitting with their families. Others anxiously paced the room. At 8:59 a.m., everyone stilled and the countdown to unseal the envelopes began. Counting grew louder as the seconds ticked closer — three, two, one, zero.

Students and their families erupted in a burst of celebration, tears and jubilation as they collectively sighed in relief, finally knowing where their next step will take place.

Among the students celebrating was Alanna James, who won’t be traveling far for her placement. James matched in the ophthalmology residency at Loma Linda University Health, a three-year program designed to provide intensive clinical training in an academic environment.

In 2018, 625 people applied to 475 available positions in Ophthalmology across the United States. This extremely competitive specialty has a reputation for being difficult to match into because of the high numbers of applicants and the standards for acceptance.

The average applicant applies to 76 programs. “I can’t even count how many times I heard the phrase ‘apply broadly,’” James said. “You work hard, travel to as many places as will interview you, and spend thousands of dollars, all in the hopes of matching to one of those available positions.”

For James, medicine has been something that was always in the plan. She attended a medical high school and completed her college courses after three years at Andrews University. Following her junior year, she was accepted early at Loma Linda University School of Medicine. Being the youngest student in her class, she sought counsel along the way. “It’s a process that depends on your scores and who you know, and I was blessed to have mentors who helped me get interviews and guide me along in the process,” she said.

James will be one of four residents who matched to ophthalmology at Loma Linda University Health.

“I’m excited to get the opportunity to change the face of ophthalmology,” James said. “I’m so very blessed to have matched at Loma Linda University Health and am extremely excited to see what God does next!”

Daniel Amponsah, a native of nearby Yucaipa, matched in Internal Medicine at Mass General. The three-year program was his top choice. “I’m definitely going to bring the whole person care mindset with me,” he said.

Rubicella Perez, who will be headed to Kennewick, Washington this summer, was surrounded by friends as she celebrated her match. “I’m going back to the place I grew up,” she said. “I know the community’s needs and I’m ready to get to work meeting them.” Perez matched at her top choice in Family Medicine.

Keith Parker, who found out he is headed to do dermatology in Billings, Montana, was joined by his wife and two young sons who were thrilled to be going back to family in Montana. “We’re rural folks going to rural America — it’s exactly what we wanted and exactly what we needed,” he said.

“No matter where we all go, we’ll always be connected by the memories and education we received here. We’ve been given what we need to succeed, and it’s time for the next step.”