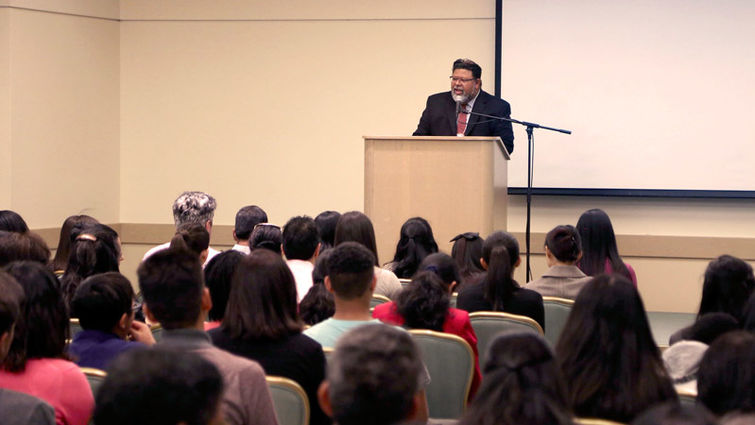 The largest group of Inland Empire high school students ever to apply to the Apprenticeship Bridge to College (ABC) program at Loma Linda University School of Medicine (LLUSM) turned out on Tuesday, March 29, at an invitation-only screening in the Wong Kerlee international conference center.

According to Marino De Leon, PhD, director of the Center for Health Disparities and Molecular Medicine (CHDMM), sponsor of the event, a total of 73 juniors and seniors from several Inland Empire high schools were invited to interview for 10-15 openings in the popular summer research experience program.

“We had the highest number of students invited to interview in the history of the program,” De Leon observes. “These students aspire to follow a career in biomedical science.”

Students selected to participate will spend two months this summer working on a research project with a member of the LLU faculty. De Leon hastens to add that this is not high school-level research, but actual university investigational studies.

“The intent of the program is to immerse accepted students in biomedical research to enhance their qualifications to successfully finish a college STEM degree and consider applying to a biomedical doctoral program,” he says, referring to the science, technology, engineering, and mathematics curriculum currently given strong emphasis by global educational leaders.

De Leon points out that the ABC program has been highly successful not only in helping students discover an interest in scientific careers, but also in retaining those who pursue graduate and postgraduate degrees.

“More than 85 percent of minority students who aspire to finish a STEM discipline in college drop out by their third year,” he reports. “But this program”—the ABC program at LLUMC—“is accomplishing the goal of retaining about 70 percent of them in a STEM career.”

Looked at another way, the national average is approximately a 15 percent rate for all minority students who aspire to a STEM degree in college, while the Loma Linda program enjoys a 70 percent success rate.

After dinner, the brief program at the March 29 event included general instructions about the program by Marino De Leon, Carlos A. Casiano, PhD, associate director for the CHDMM, and Daisy De Leon, PhD, assistant to the dean for diversity. Roger Hadley, MD, LLUSM dean, gave a short talk on “The role of research in health care.”

The program also included brief presentations on financing a scientific education by Juan Carlos Belliard, PhD, MPH, director of the Institute for Community Partnerships, and Frank Rendel, assistant director of the office of financial aid. Once the formalities were over, invitees were directed to interviewing stations in adjacent rooms where they met LLU faculty and students to discuss their interest in the STEM disciplines and scientific career options.

More than 200 people—including 73 Inland Empire high school juniors and seniors and members of their families as well as school representatives, and Loma Linda University students and faculty members—attended the Apprenticeship Bridge to College Invitational on March 29. The program was held to identify the 10 to 15 students who will advance to participate in a two-month summer research experience at Loma Linda University School of Medicine.
Academics Community Health & Wellness Patient Care Research Spiritual Life & Wholeness