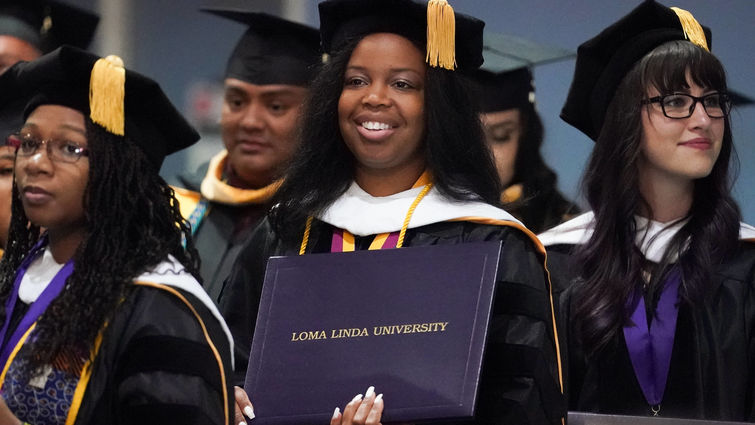 In a tradition stretching several years, the schools of Behavioral Health and Religion at Loma Linda University celebrated a joint commencement ceremony, together graduating about 135 students June 16.

The graduates were sent forth to be “More Than Conquerors” by featured speaker Ted Baehr, JD, whose speech title alluded to Romans 8:37:  No, in all these things we are more than conquerors through him who loved us.Baehr is chair of the Christian Film and Television Commission and founder/publisher of Movieguide.His work aims to positively influence the values represented in mass media entertainment and to help audiences make informed decisions about their entertainment viewing.

The students who earned their degrees conquered many challenges to reach this point — demanding assignments, tough examinations, long hours of study and research, immersive internships and practicums, and thousands of words of writing.

Their work culminated in the degrees conferred as follows:

The School of Religion conferred Master of Art degrees to students in two programs: Religion & Society, and Bioethics.

The hard work of students was also illuminated by special awards presented to a number of graduates.

Both schools presented special awards to a number of graduates, as well as faculty/staff members and alumni.

The School of Religion awarded the following:

The School of Behavioral Health honored these individuals:

Alumnus of the Year: Carlos Escoto

Each commencement season, Loma Linda University, as a whole, confers special honors to individuals from near and far. Two of those awards were presented during the ceremony for the schools of Religion and Behavioral Health.

Martin Doblmeier, founder and president of Journey Films, received an honorary doctorate — the Doctor of Humane Letters award. Doblmeier’s award-winning films are noted for exploring how lived-out faith and belief lead to extraordinary acts and outcomes. Among his films are a trilogy about Seventh-day Adventists: The Adventists, The Adventists 2and The Blueprint: The Story of Adventist Education.