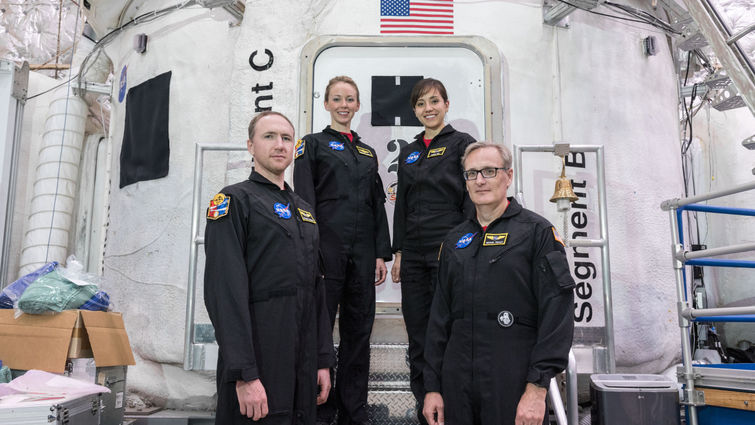 HERA, designed by teams at NASA and used by NASA’s Human Research Program, is a simulation environment created on Earth with the goal of producing the same physical and mental effects on the body similar to those experienced in space.

The mission’s focus was to determine how the specific crews interacted over time, in particular under both psychological and social stress and sleep deprivation. While not actually experiencing microgravity, the crew was tasked with exploring the fictional distant asteroid known as Geographos. In addition, the crew underwent an exercise study that limited the amount of physical activity they could do.

“We had a bike and dumbbells. Every other day we were allowed to do one of those things,” said Pecaut, who serves as a research professor and vice chair of the Division of Biomedical Engineering Sciences at Loma Linda University’s School of Medicine

The group of four participants interacted with one another through various team-building and computer-based activities to test cognitive function and emotional states. In addition to the four-person crew, a team of outside investigators tested and analyzed behavioral, social and psychological outcomes.

Participants were selected for the program based on meeting the qualifications of an astronaut “like” individual and had to be 30-55 years old. NASA requires all participants to run through an IQ test, a psych evaluation and are tested based on emotional stability.

“They were very thorough,” said Pecaut, who underwent the lengthy pre-screening process, followed by various physical and psychological exams administered in-person over the course of 36 hours.

Sleep deprivation was key to the research, and researchers examined methods to maintain crew performance with limited sleep. Pecaut recalls slipping into a micro-nap, and Mission Control woke him by saying, “Your life support system is failing. You need to check the status of the electrolysis module.” The crew was never in danger. However, due to the simulation they were required to go through the motions of being in space, including maintaining life support and preparing for space related disasters such as radiation exposure due to solar flares, leaks in the capsule walls or on-board fires.

“Our daily schedule was similar to what they do on the Space Station. Everything was mapped out,” Pecaut said.

Not all of it was work. The crew read a lot, and played Scrabble, cards, and charades for fun.  Every Saturday, the crew dressed up as much as they could and enjoyed their meals on the big table and listened to music. NASA also asked for a list of their favorite songs prior to the crew’s arrival to use as a wake-up call. The crew even enjoyed watching Netflix during the mission.

“We watched a ton of space movies, including Europa Report and the new Lost in Space series,” Pecaut said.

Throughout the mission, the crew would attach daily sensors to their clothing. They had two badges that monitored social interactions. Each member also had to put on a microphone, heart rate monitor and watches.

“I was actually wearing a watch on both hands and one in my pocket to make sure all of the sensors were working,” Pecaut said.

Once the monitors were hooked up, the crew was able to enjoy their meals. “It was all freeze-dried and vacuum sealed,” Pecaut said of the food prepared to survive the entire six or seven weeks. “I think some of it lasts for years.”

Pecaut said NASA measured their resting metabolic rate to determine how many calories they needed to survive.

The sleeping quarters were slightly bigger than the real station; however, Pecaut said it didn’t matter too much since the crew only slept five hours each weekday.

“We had our own rooms that we called a coffin,” Pecaut said. “Because we were only sleeping five hours most nights, there were 19 hours to do other things.”

Pecaut learned he was selected for the program approximately three weeks prior to the mission. He originally applied to the Hawai’i Space Exploration Analog and Simulation program operated by the University of Hawai’i at Manoa. The Hawai’i native was hoping to visit his family. Although he was selected as an alternate crew member, he didn’t get to participate in an actual mission. After that disappointing attempt, a colleague told him about HERA and he immediately applied.

Pecaut knew from an early age he wanted to explore the parallels of space. He even earned a degree in aerospace engineering.

“I always wanted to be an astronaut and a scientist,” Pecaut said. However, when his eyesight deteriorated, he wasn’t able to make the requirements at the time. He still hopes one day he can travel to Mars or the moon. “I want to set foot on another place,” Pecaut said.

Upon his arrival back on Earth, Pecaut and the crew enjoyed a brief meal at a local restaurant and was up early the next day for additional testing. “I was back in the lab at 6:45 a.m.,” Pecaut said. “Which is even earlier than they had us waking up on the mission.”

Pecaut wasn’t initially nervous for the mission because of his involvement in previous spaceflight experiments. If anything, he was more nervous about his yellow Labrador retriever, Hina, — named for a Polynesian moon goddess — not able to walk her every day or run a couple times a week.

Overall, Pecaut was thrilled at the opportunity, and he looks forward to the next mission.

“If NASA were to pick up the phone and ask me to go to Mars, I could do it,” Pecaut said. “Though Mars would take three years, instead of 45 days, I think I can do it.”