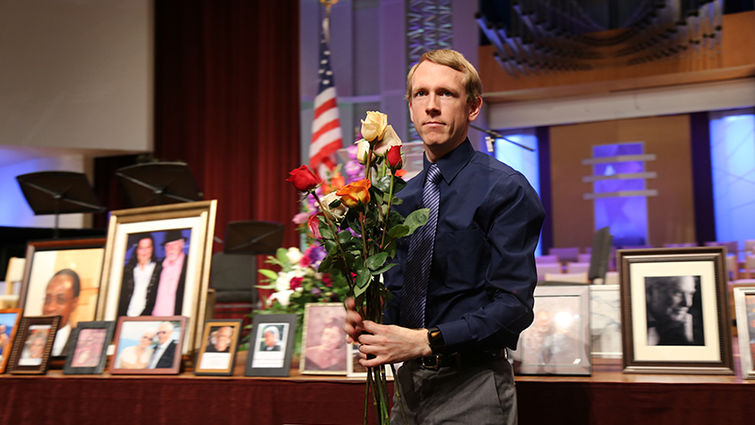 Students gave roses to family members of people who donated their bodies so others could learn. [Photos by James Ponder]

As family members and friends placed photographs of their deceased loved ones at the front of the church, the students — who came from the schools of Allied Health Professions, Dentistry, Medicine and Nursing — studied the pictures carefully.

The images revealed what the people — all of whom had donated their bodies to science — had looked like while they were alive. The way they faced the camera, the color of their eyes and hair, their choice of clothing, whether they appeared smiling or serious; all clues to the personhood and individuality of the donors received intense and reverent scrutiny from the students.

Every one of the dozens of students who attended and participated in the service did so because they wanted to. Their participation and attendance was voluntary, and their involvement did not improve their grades or win points with their professors. They were there solely to express their reverent appreciation for the privilege of learning from the donors.

As the program got started, student after student rose to share with the husbands and wives, sons and daughters, parents and siblings of the deceased how the donors had enriched their lives and touched their hearts. As often as not, the students used endearing terms like “my teacher” or “my friend” to describe the people whose donation had done so much to expand their understanding of the organs and systems of the body. One student said each donor’s gift will impact countless lives.

Allison Haczewski, a student in the doctor of physical therapy program, told family members and friends of the donors, “I hope you will take comfort from knowing that they were treated with love and respect.”

As the only university in the Inland Empire with its own whole-body donation program, Loma Linda University takes the gift of donor bodies seriously. They allow tomorrow’s health care professionals to sharpen their understanding of human anatomy and physiology long before they ever treat a living patient.

Founded in the 1940s, the Bodies for Science program is also the largest of its kind in the Seventh-day Adventist educational system, of which the university is a part.

P. B. Nava, PhD, vice chair of pathology and human anatomy at Loma Linda University School of Medicine, said the opportunity to work on an actual human body is invaluable to the process of educating future clinicians.

“The dissected cadaver remains the most captivating means of presenting anatomy,” Nava said.

In calling anatomy the foundation of medical science, Nava noted that both cadaver dissection and modern technological resources are needed to allow students to develop practical, theoretical and ethical skills. “If students are going to understand how the body works, they must have the opportunity to dissect the human body,” he said.

One of the students at the memorial service agreed. “There is so much more to God’s anatomical design than could ever be learned from a textbook,” she said.

Darrell K. Petersen, PhD, director of anatomical services for Loma Linda University School of Medicine, calls donated bodies precious and irreplaceable gifts and says an average of 170 cadavers are donated to the program each year. He added that many people who attend the annual memorial service are so moved by the student testimony that they sign up for the program themselves. Others come in by word of mouth.

Another highlight of the Loma Linda University program is that students have access to the ultramodern facilities of the Swatek Anatomy Center in the Centennial Complex. Featuring five separate labs and a total of 104 gross anatomy dissection stations, the facility enables students to practice their skills in a spacious, well-lit environment that enhances the learning process.

Getting to know the teachers

Living donors sign agreements stipulating that their bodies will be donated to the university at the time of their death. The students dissect and learn from the cadavers for a period ranging from a few months to two years. After that, the bodies are cremated at the university’s expense and the ashes are either returned to the family or interred in a community burial plot purchased by the university, and family members and friends are invited to the memorial service.

Although donor identities are never revealed to the students or the public, their occupations are. A brochure distributed at the service revealed that this year’s honorees worked in multiple sectors of the economy. Some were accountants, others truck drivers. Some worked in aerospace, others in education. Some were pastors, others were warehouse workers or retail sales people. All donated their bodies to give future health workers a solid foundation for a career in the healing arts.

As the ceremony ended and guests headed to the fellowship hall for lunch, the daughter of one couple who were both donors, said her paternal grandmother was the first member of her family to participate in the Bodies for Science program. “My parents saw how easy it was and decided to do this,” the daughter noted, adding that her mother and father, two of the donors honored this year, had been an accountant/bookkeeper for the YMCA and a trucker for Dresser Industries, respectively. “Their lives revolved around their four grandchildren,” she said.

Another family who attended the service said their father, a World War II veteran who devoted his postwar career to working at March Air Force Base and Camp Pendleton, donated his body to the program after passing away in 2012. Their mother, whom one of her daughters described as the visionary founder of a museum in Perris, California, died last year.

Members of both families expressed their deep appreciation to Loma Linda University for hosting the program and memorial service.

For more information about the Bodies for Science program, visit http://bit.ly/2oQt3eH 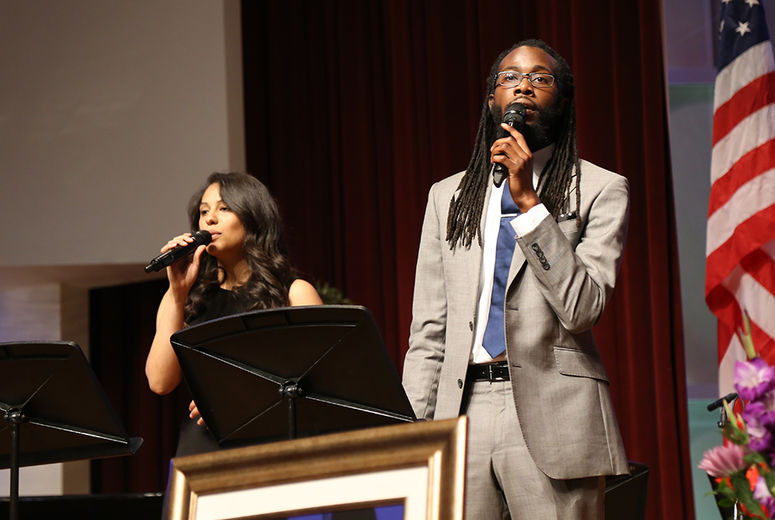 Students sang from the heart at the Bodies for Science memorial service. 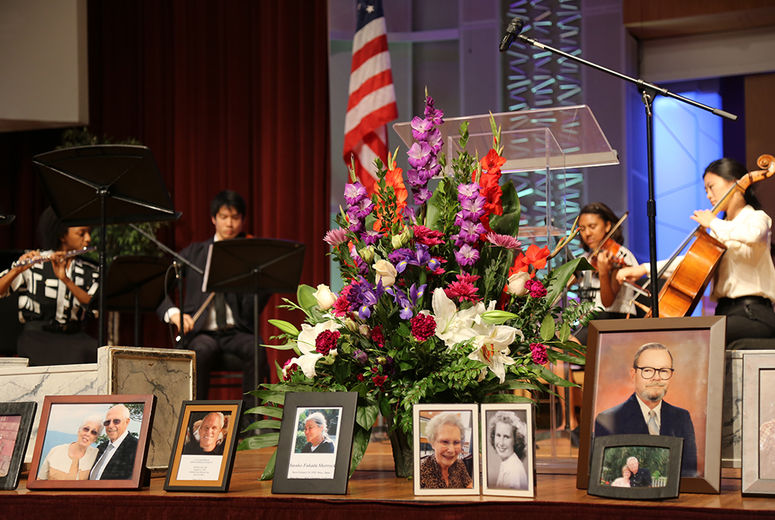 Pictures of the deceased graced the front of the sanctuary at the service. 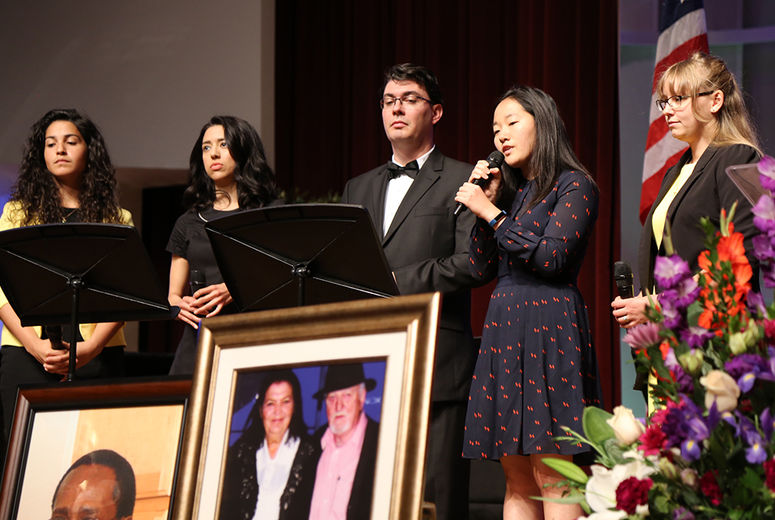 Songs and testimonies in honor of the deceased were reverent and reflective. 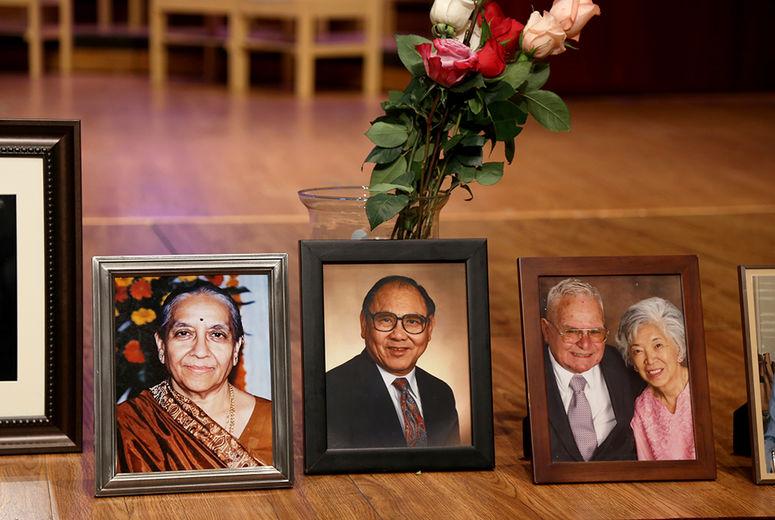 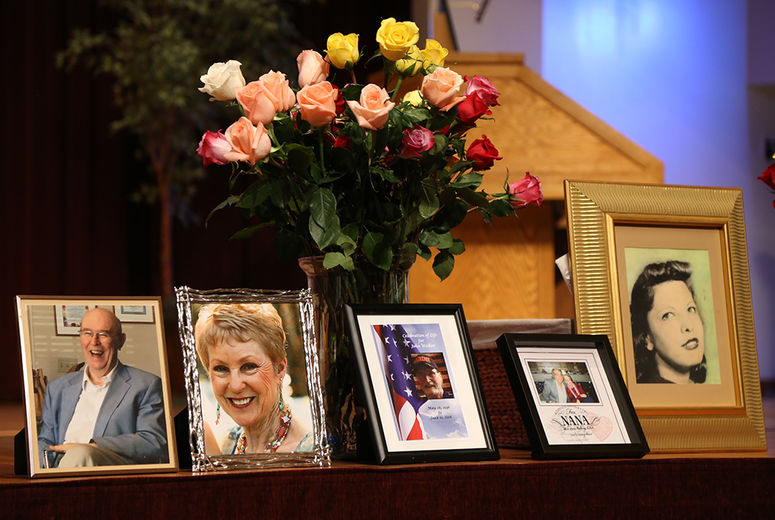 Every picture tells the story of a loved one's life. 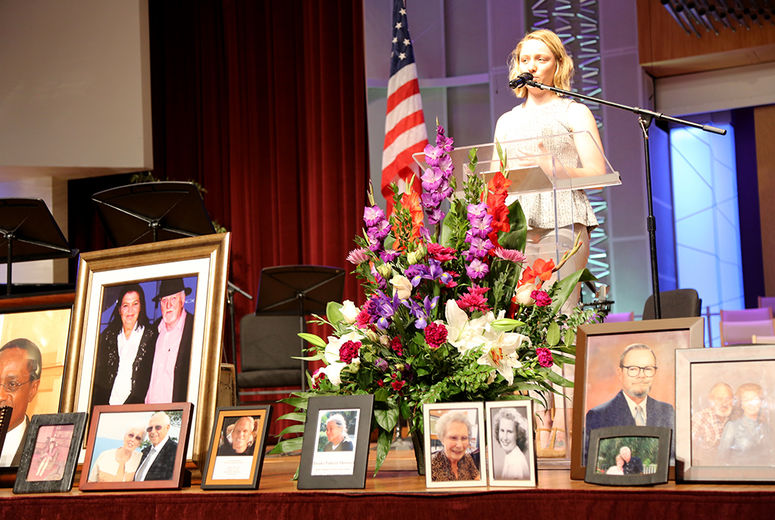 Students affectionately called the donors "my teacher" or "my friend." 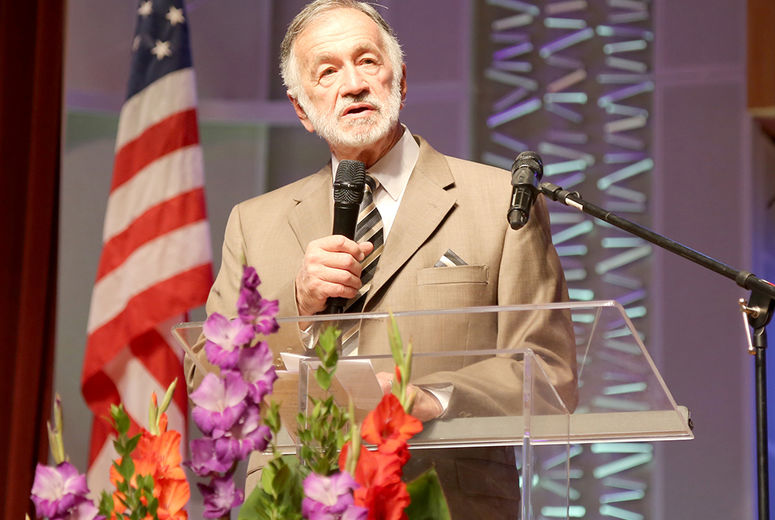 Dr. Nava thanked guests for attending as the moving service came to an end. 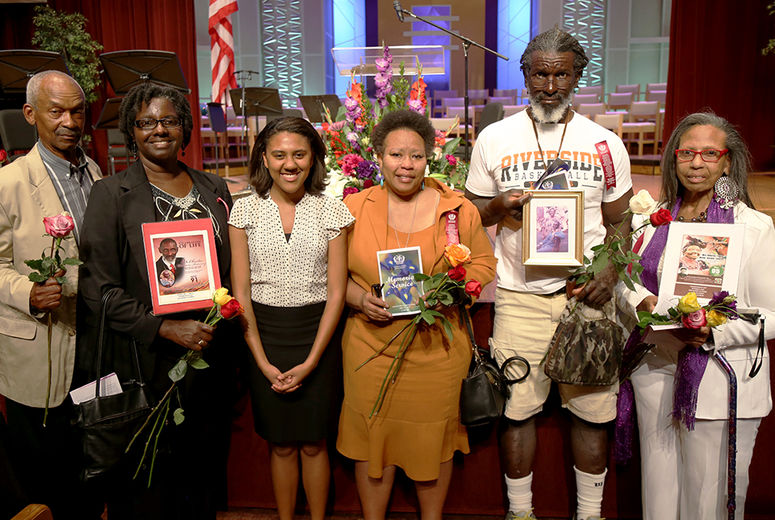 A Loma Linda University student (third from left) joined members of a family in celebrating the lives of their loved ones. 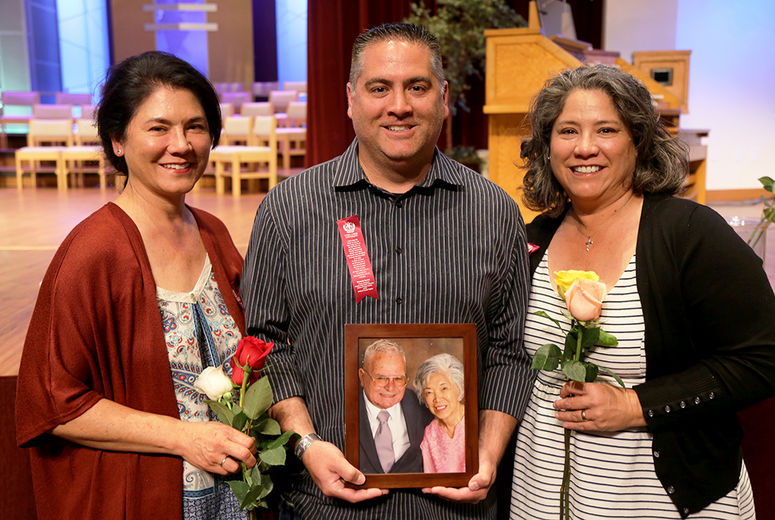 This family recalled the lives of their deceased loved ones.