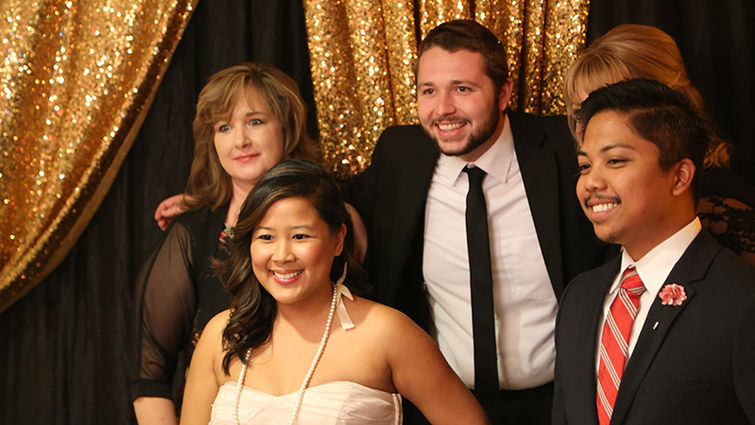 Loma Linda University’s biggest school is celebrating its 50th year of distinguished history in 2016. Since the founding of the School of Allied Health Professions in 1966, it has grown to boast nine departments and more than 50 degrees and programs.

On the evening of April 23, the school hosted a golden anniversary gala decorated in pinks, golds and flowing beads, with entertainment by a men’s trio, the Stratton Half Brothers, performing classic songs of yesteryear.

“Fifty years is considered a golden celebration, and this is the golden year for the School of Allied Health Professions,” Jackson says.

Several members of the 50th — and founding — anniversary class of 1966 attended. The alumni pooled together to donate a check to the school of $11,000, promising the amount would grow as more members of the class contribute.

Jackson thanked the class members of 1966 for their generosity and for making the evening historic with their presence.

Alumni of all generations, from near and far, attended the gala. One guest traveled from the Republic of Moldova, a distance of more than 6,200 miles. The most senior alumnus in attendance — or rather, the most distinguished — was 83 years old.

Also in attendance were two of the school’s deans — two, in fact of only three in the school’s history. In addition to Jackson, present as a guest was dean emerita Joyce Hopp, PhD, MPH, whom Jackson specially recognized that night. Hopp was dean from 1986 to 2002. (Founding dean emeritus Ivor Woodward, PhD, passed away in 2008.)

Some alumni in attendance at the gala predate their education to the school’s founding, such as Georgia Hodgkin, EdD, who graduated with her degree in nutrition and dietetics from Loma Linda University in 1963. Today, she is professor and associate chair, department of nutrition and dietetics, School of Allied Health Professions.

Development officer Natalie Kopp announced at the gala that the school is starting two new scholarship funds, one in honor of Hodgkin and one in honor of another longtime faculty member, John Lewis, PhD.

A dash for cash during the banquet allowed attendees to donate to one of these two new funds or another fund of their choice, and with sponsorships from Jackson, Hodgkin and Kopp, the dash raised more than $9,000 for the School of Allied Health Professions.

Additionally, with a silent auction and opportunity drawing, the school raised another $6,000 that night. All told, the evening total was $26,000.

The school gave out a number of awards that evening, including honoring Alumna of the Year Sandy Roberts, DMin, MA, who earned her degree in nutrition and dietetics in 1980 from the School of Allied Health Professions. Today, she is president of the Southeastern California Conference of Seventh-day Adventists.

“We are proud of Roberts, who followed her passion into ministry and utilizes her education with us in a unique way,” Dean Jackson says.

Other distinguished alumni honored during the banquet were, by department:

The other recognition the school offers at homecoming is called the Rising Star Award, which is given to current students or alumni who have graduated in the past five years. The awardees were: