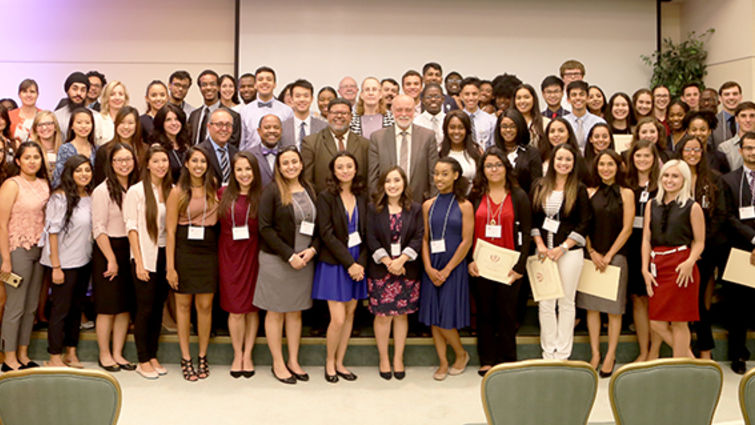 Students, faculty and staff at the 17th annual Summer Research Symposium at LLU School of Medicine.

A researcher who has been mentoring research scientists for the better part of five decades told a group of 80 high school, college and medical students from minority groups that the world needs them to devote their careers to research in health disparities and biomedical sciences.

Frank Bayliss, PhD, a professor at San Francisco State University and adjunct professor at UC San Francisco, made the remarks during his keynote address at the 17th annual Health Disparities Research Symposium, held earlier this month on the campus of Loma Linda University Health. Altogether, the event — which notably featured a display of 80 scientific posters detailing the student research projects — attracted an estimated 350 attendees.

“All we ask of you is that you do your best,” Bayliss told the approximately student participants in the summer program. “You’re in the right place. Just stay with it.”

The symposium underscored the importance of the program, which brings Inland Empire high school students together with undergraduate, graduate and medical students for two months of intensive scientific research under the tutelage of LLU faculty members. The twin purposes of the program, which launched in 2001, are to attract talented students from minority groups to careers in biomedical research, and to help end health disparities.

Bayliss focused on what students can do to advocate for themselves in order to achieve success in their journey to become professional researchers. He likened the quest to a series of apprenticeships as the students navigate through the maze of getting a degree, pursuing postdoctoral education and landing faculty and professional positions.

During his lecture, Bayliss stressed the how-to of the research career path, discussing qualities to look for in selecting a mentor, recommending books to read, and sharing information about financial incentives available to help students pursue their education.

He also encouraged them to believe in the education they received during their two-month program at Loma Linda. “From what I’ve seen here, you’ve already had a significant research experience,” Bayliss said.

Marino De Leon, PhD, director of both the Center for Health Disparities and Molecular Medicine at the LLU School of Medicine and the summer program, said the need for minority students to become scientists, physicians and researchers has never been more critical as ethnic groups face a disproportionate burden of diseases such as cancer, diabetes, HIV/AIDS and stroke.

In speaking of the success of the program, De Leon said graduates are ensconced today as professional researchers at leading scientific institutions. Subburaman Mohan, PhD, research professor of both medicine and basic sciences, underscored the point during a noon panel discussion he moderated. His guests — Gabriel Linares, PhD, Frankis Almaguel, MD/PhD, and Dequina Nicholas, PhD — are alumni of the program.

During the discussion, Linares, currently a researcher at the University of Southern California, discussed his work with neurodegenerative diseases. Almaguel, a physician/scientist at LLU, talked about imaging molecules in the war against cancer. Nicholas, a researcher at Boston University, explained lipid metabolism and type 2 diabetes inflammation.

In a special half-hour presentation before the main program, Johnny Figueroa, PhD, assistant professor of physiology, introduced 10 students from the 2017 summer research program and asked them to summarize their findings.

A typical example was Garcia-Orozco, a high school student, whose project was titled, “The Effect of TSLP Cytokine on the Expression of CIS and SOCS1 in High Risk CRLF2 B-ALL.” In lay terminology, the title denotes an investigation into how inflammatory responses may alter the expression of genes associated with acute lymphoblastic leukemia, one of the most common cancers in children.

Richard H. Hart, MD, DrPH, president of Loma Linda University Health, used simpler language still when he offered an inspirational proverb to encourage students to make a difference for themselves and their communities. “Faith is like a bird that senses the breaking of dawn and starts singing while it is still dark,” he said.

Penelope Duerksen-Hughes, PhD, associate dean for basic sciences, expressed the desire of program planners and staff members when she told the students she hoped they had developed a taste for research during the summer program.

“I hope you got addicted to it!” she said. 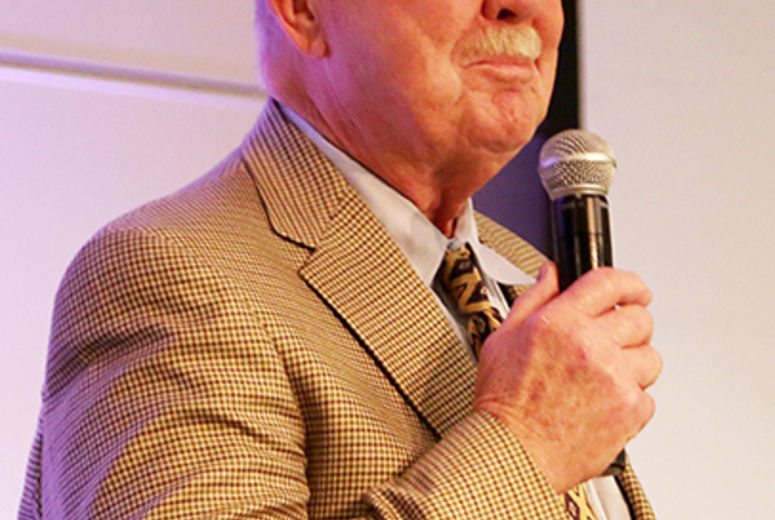 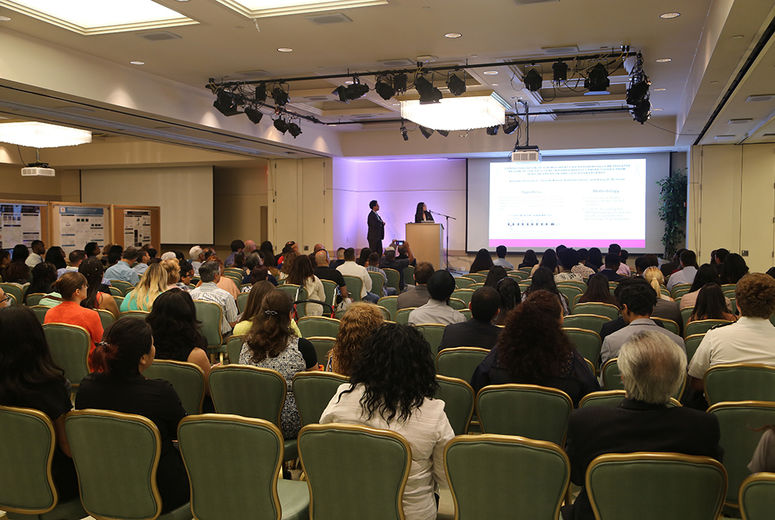 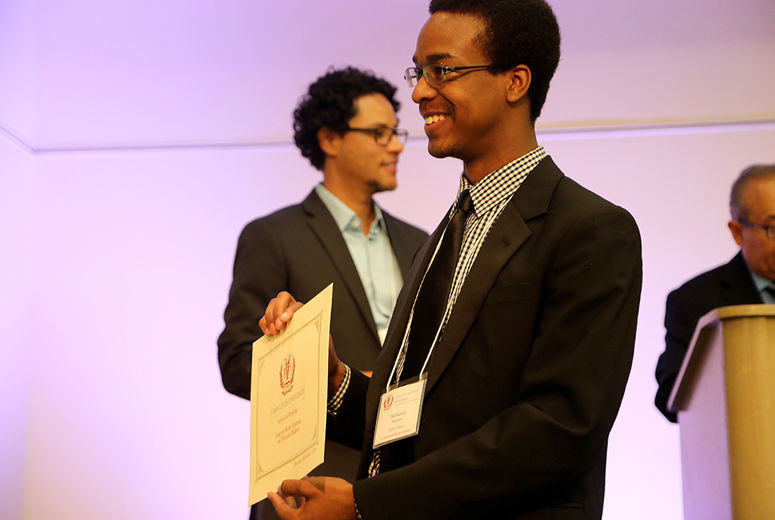 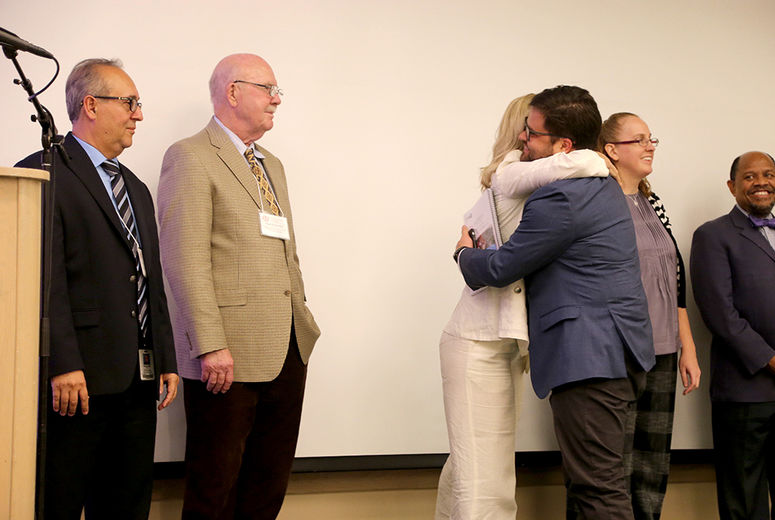 What better way to celebrate a successful research project than with a hug from your professor. 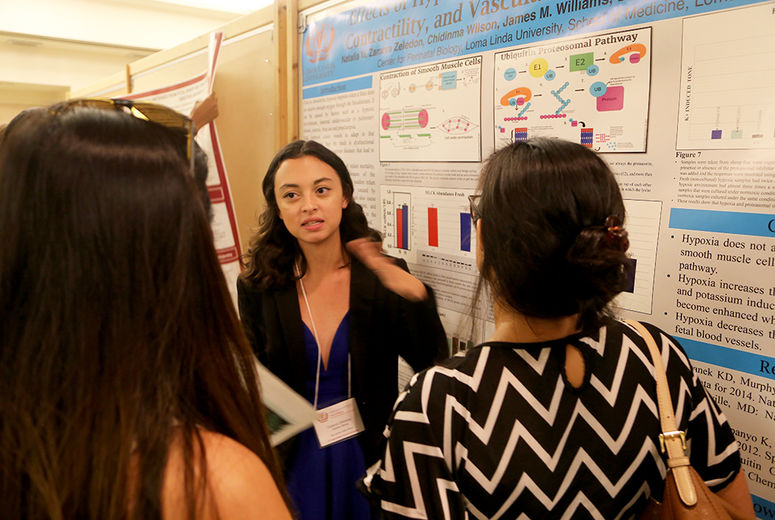 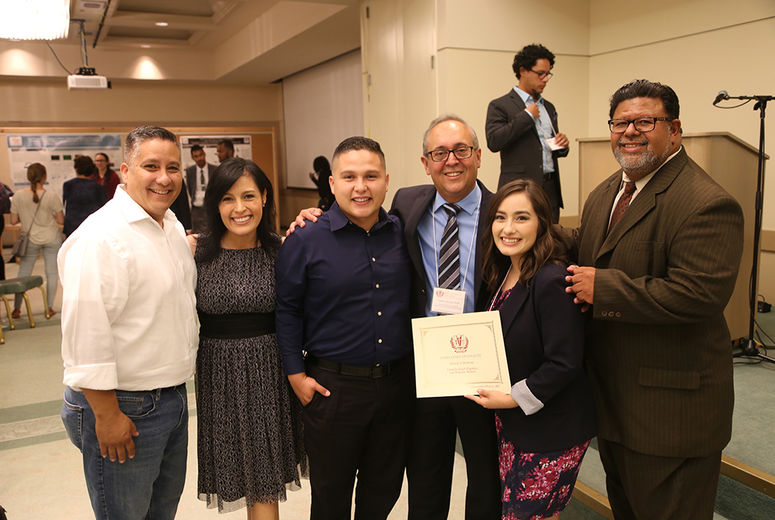 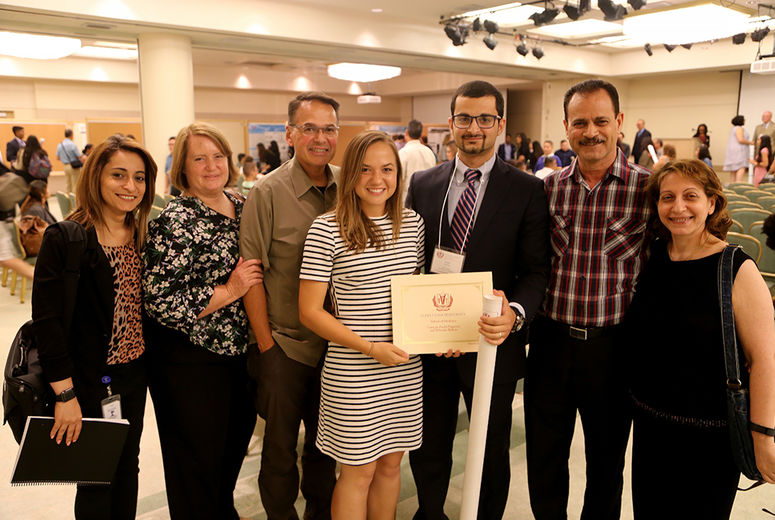 Marvin Amen celebrates with his wife, Laura, his parents and sister, and his in-laws.