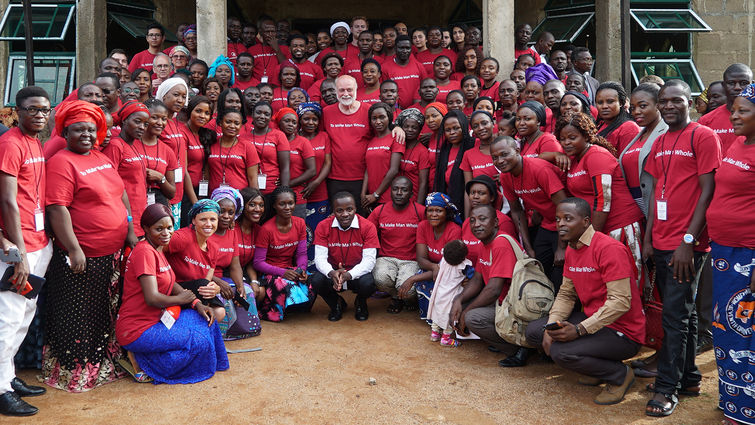 Richard Hart, MD, DrPH, president of Loma Linda University Health, with some of the estimated 400 volunteers on the recent Nigeria mission trip.

While students from four Seventh-day Adventist universities and local medical volunteers treated more than 10,000 people, Hart took time out from the clinic to give antibiotic injections to 60 cows belonging to local Fulani people east of Jos, a city of nearly 1 million people in Plateau state.

Cattle form the backbone of the culture and economy of this nomadic people found throughout Northwest Africa. “Keeping them healthy is extremely important to the Fulani and a great way to help this largely Muslim minority,” Hart said after assisting Sarah Lowry, a volunteer veterinarian who treated more than 2,000 cattle and goats.

The June 12 to 29 trip advances Loma Linda University Health’s continuing commitment to supporting health outreach in the region and in other parts of the world. Last month’s trip is one of approximately 10 such mission trips each year that are coordinated by the university’s Students for International Mission Service. Many of the trips support rural Seventh-day Adventist medical centers and clinics affiliated with Adventist Health International, which is based in Loma Linda. The Nigeria trip supported Jengre Adventist Hospital and established the Eto Baba and Buken clinics in Jos.

Thirty Loma Linda students, six students from Middle East University in Lebanon, one student from Montemorelos University in Mexico, and a number from Babcock University in Nigeria, joined with some 200 local Adventist medical volunteers in the region.

Many participants said their arrival became somewhat surreal. When the bus full of tired volunteers fighting jet lag arrived late in Jengre, noise in the area caused several to wonder about the commotion. It turned out a large crowd of locals, along with a contingent of law enforcement and security officers, was on hand to greet the group with a marching band.

“Dr. Hart stepped off the bus while it was still moving to join the parade,” recalled Ian Walker, the group’s videographer.

The rest of the volunteers followed suit, lining up behind Hart to march through the streets to the tune of “When the Saints Go Marching In.”

School of Public Health student Sarah Snyder dodged puddles as locals danced and sang. “There was a little bit of lightning and it started to rain, which made it even more magical,” she recalled.

The work consisted of checking blood pressures, asking if patients had kidney or liver disease, and deciding if they needed surgery. Since there was a limited number of surgeons, they also determined which patients needed it most. Luchs said he treasured the gratefulness of the people.

“Even though we couldn’t resolve all their situations, they were really happy we were there,” he said.

Snyder, the public health student, also learned about the poignant realities of providing care on such a large scale in an area of great need. She had to turn away one patient because it wasn’t possible for him to be seen that day. Roughly 2,000 people were in line ahead of him and only 200 could be treated that day.

“I hated telling him that,” Snyder said. “The fact that there were lots of other people ahead of him didn’t make his needs any less valid.”

Later, a teenage girl pulled Snyder aside to ask her name, where she was from, and if they might become friends. “That was all she wanted,” Snyder said. “Just to say ‘hi’ and become friends. It was a good reminder that sometimes even a few words can make someone’s day better.”

Many of the patients came from long distances. One boy walked, hitched rides and rode buses to get to the clinic. He had experienced hearing loss for more than a year, which was interfering with his performance in school. Keri Genstler, MD, a resident pediatrician at Loma Linda University Children’s Hospital, said the boy’s ears were heavily impacted with cerumen, commonly known as ear wax. She soaked his ears in water and spent an hour disimpacting the wax and removing a foreign body in his ear canal.

Government officials took notice. The group was hosted by Jacob Gyang Buba, king of the City of Jos, and Simon Lalong, governor of Plateau state.

The trip also helped further solidify Loma Linda’s ongoing support of medical outreach in the region. Peter Baker, JD, MBA, administrator of Loma Linda University Medical Center – Murrieta, was appointed chair of the AHI-Northern Nigeria Board of Directors during the trip, taking over the post for Hart.

The board — comprising local Adventist Church officials, other AHI representatives and selected lay members — oversees seven clinics and one hospital in Nigeria’s central and northern rural areas. It intends to establish more facilities in urban centers and turn a clinic into a regional diagnostic center.

Hart will continue serving on the board, and he and Baker will travel to Nigeria twice a year for meetings, and participate in two others each year by teleconferencing.

On the trip, Baker pointed out the warm, welcoming spirit of the locals and the enthusiasm of student volunteers. “It was great to see how active the students were in trying to treat and heal as many peoples as possible,” he said.

Hart said mission trips reaffirm the university’s commitment to global mission and reinforce its traditional emphasis on service. “This speaks to both alumni and other friends of Loma Linda University Health who watch our activities and believe in our commitments,” he said.

Hart insisted that even though locals benefited by the service provided, Nigerians were not the sole beneficiaries.

“The biggest impact will be on those of us who served,” he said.

Nigerian women having fun in the marketplace. 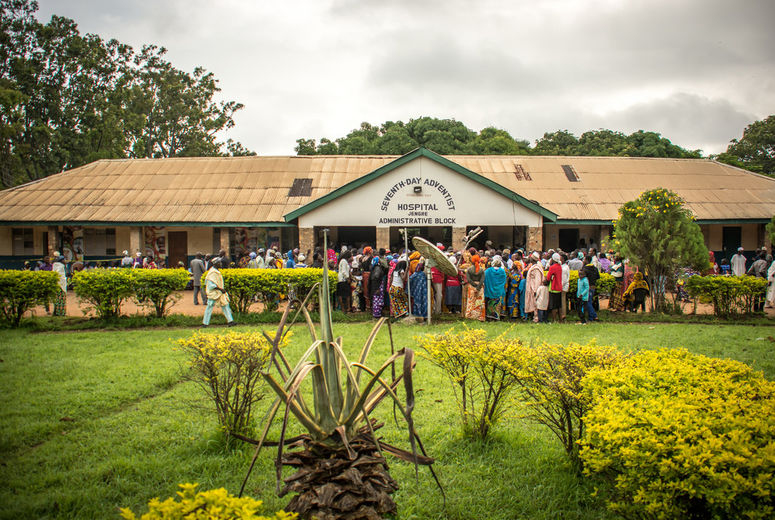 Just a few of the more than 10,000 patients treated by the volunteers. 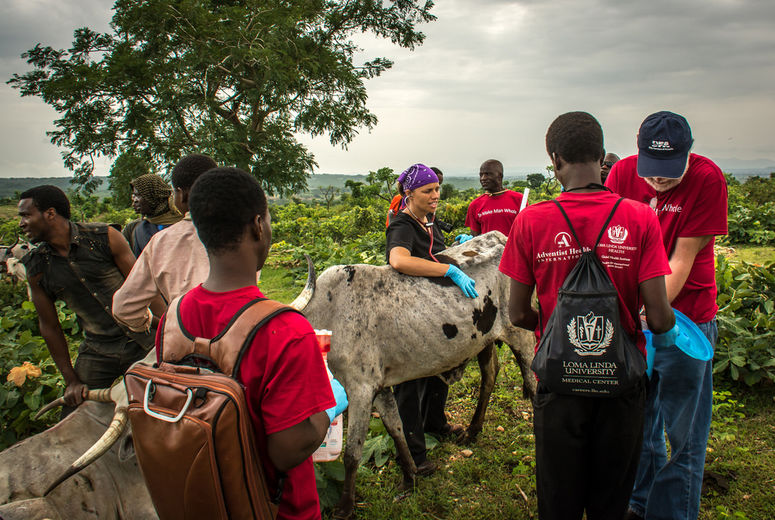 Dr. Hart attends a Fulani cow under the supervision of veterinarian Sarah Lowry. 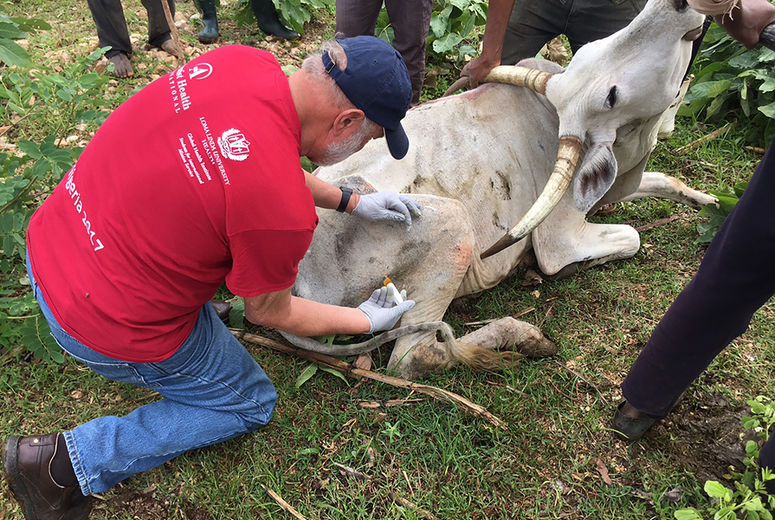 Dr. Hart and one of the approximately 60 cows he injected with antibiotics. 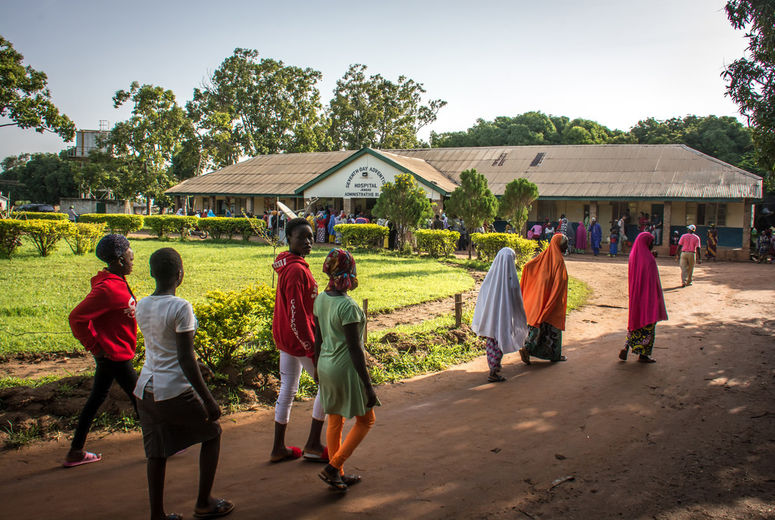 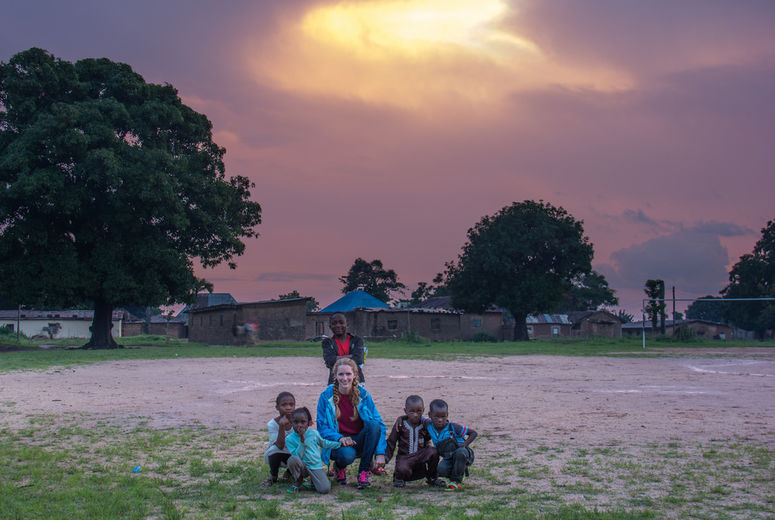 A volunteer hangs out with some of her newfound friends at the end of a day. 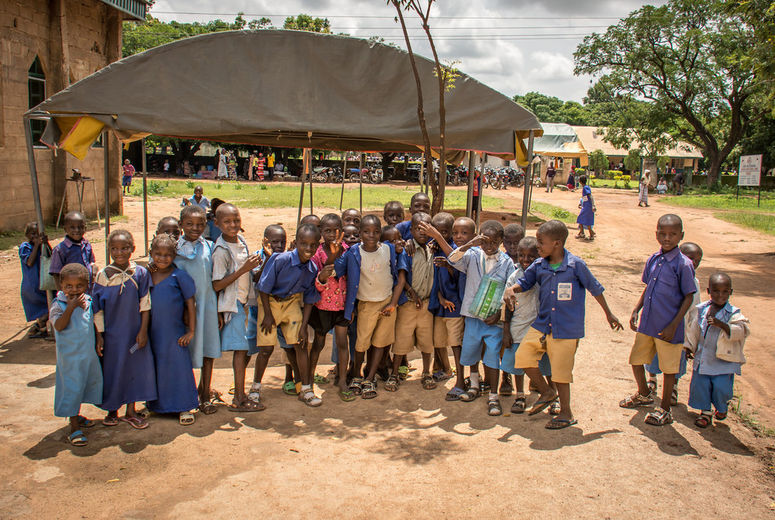 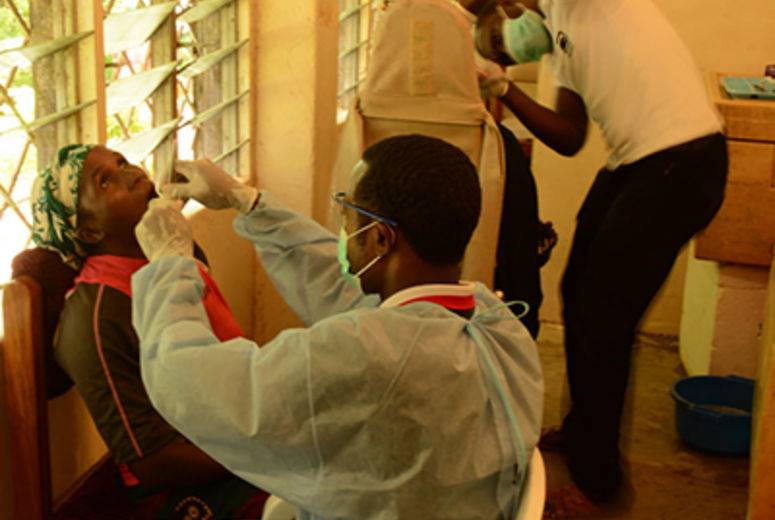 More than 700 dental patients were treated during the trip. 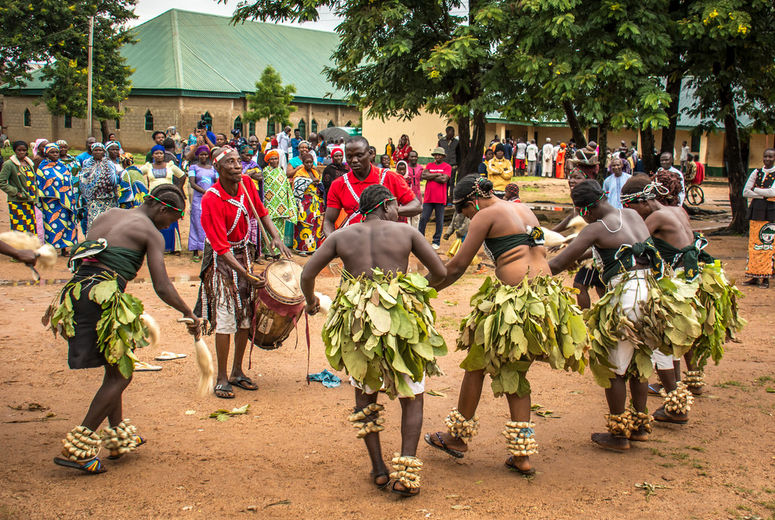 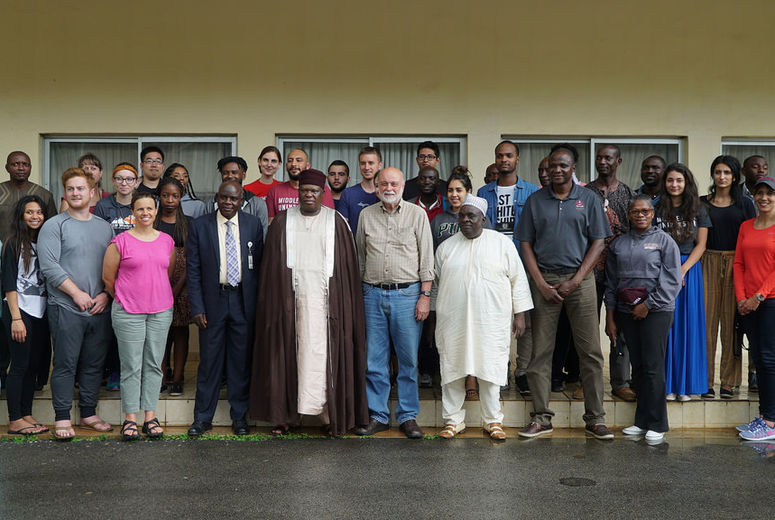 Government dignitaries and health officials met with Dr. Hart and the volunteers.

Residents of Northern Nigeria lined up for health care. 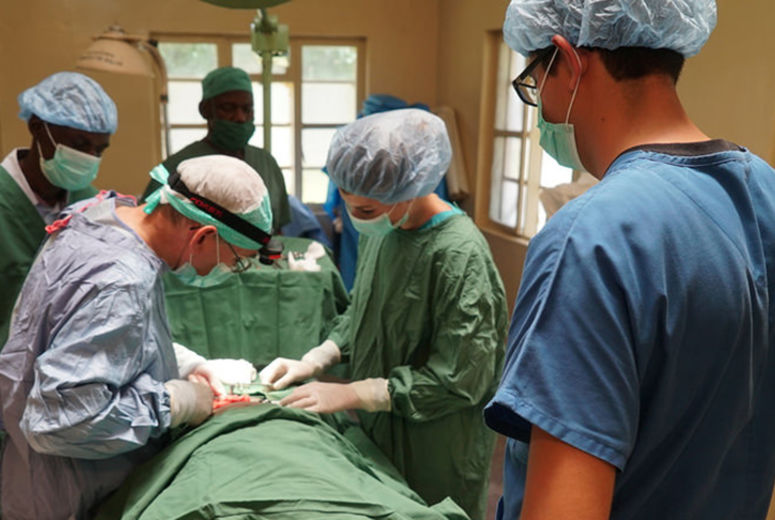 Surgeons performed more than 170 surgeries during the trip.

The rural beauty of the Nigerian countryside. 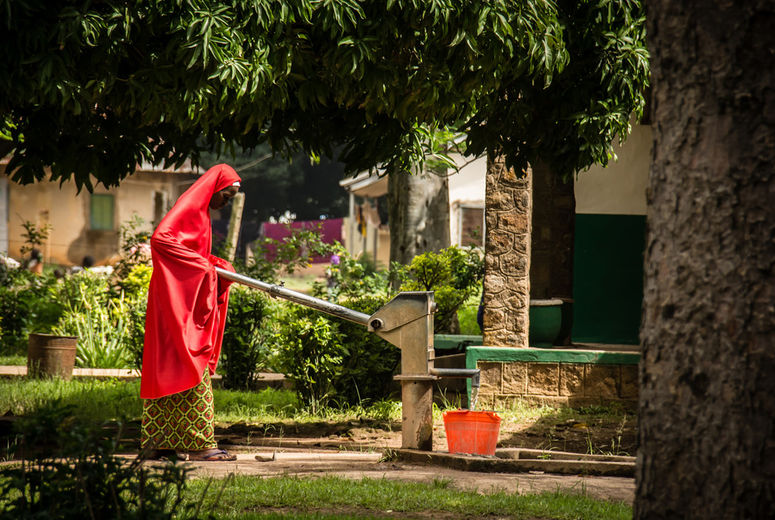 A Nigerian women dressed in red draws water from a local well.